Advertise with us
Posted 9 January, 2019


Karl Stefanovic has been hilariously trolled online after claiming his Instagram account had been hacked, and that it was someone else “liking” posts that were unfavourable to his former breakfast show Today and his replacement Deb Knight.

Over the weekend, Nine announced that Knight would form an all-female duo with incumbent Georgie Gardner for Today’s 2019 line-up.

However, by Monday, Stefanovic had apparently been busted liking posts unfavourable to Nine’s move.

“I can’t wait until the ratings drop even lower and they realise it wasn’t you that was the problem after all,” was just one of several posts reportedly given Stefanovic’s tick of approval.

Yesterday, Stefanovic (who’s still on his honeymoon) claimed the “likes” were not of his doing after his Instagram account was apparently hacked by some internet ne’er-do-well. 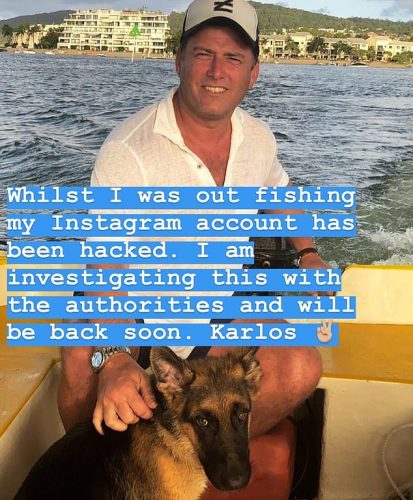 “My Instagram account has been hacked. I am investigating this with the authorities and will be back soon. Karlos,” he railed.

Despite the claims, many people aren’t buying Stefanovic’s story and, in true social media spirit, the 44-year-old has been hilariously trolled.

One sceptic leading the anti-Karl chorus: “Yeah right, somebody gained access to your account and the only thing they did is like a couple of comments?” penned one.

“Bloody Russians are all over Insta at the moment.”

“Hopefully you can cover the investigation on 60 Minutes.”

“You get pissed and go rogue again? Classic you.”

“Hacked!! Perhaps it was the Russians??”

For his part, Stefanovic has made no further comment on yesterday’s hacking claims, nor has there been any outcomes from “authorities'” investigation.