Amy Schumer is known for doing outlandish stuff, but this new photoshoot is an absolute cracker, with the comedian dressed in her own shirt that reads ‘No Coffee, No Workee’, and with flames billowing from her nether regions.

The picture, shot by renowned Annie Leibovitz, is part of Schumer’s Vanity Fair cover shoot, with the star apparently very keen on the ‘no underwear’ concept.

“I begged Annie to photograph me with no underwear on in just a T-shirt,” Schumer said, per news.com.au.

“I explained to her how important it was to me and she finally agreed. I felt powerful and beautiful. She understood once we shot it. Or maybe she ran to the bathroom to throw up. It was one of the most meaningful moments of my life.”

She also posted the shot on Instagram and wrote: “Thank you @vanityfair and Annie Leibovitz who I had to beg to take this shot.”

The magazine’s fashion and style director Jessica Diehl was also reported saying the shot was “very her”.

“The whole attitude, the T-shirt, the slogan on the T-shirt — it just felt very real, with everything else being so surreal,” she said.

The cover shot features Schumer frocked up in a red, sequinned Calvin Klein Collection bodysuit, adding a touch of glam to the feature. 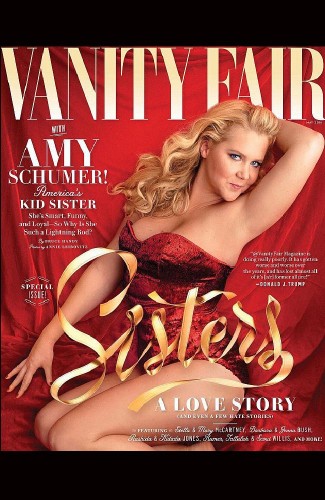 “She’s so multifaceted that if you put her in one box, you’re really not telling enough of this whole person’s story. Her voice is very zeitgeisty, and ballsy, and feisty, that it didn’t seem she could be boxed into one concept.”