Advertise with us
Posted 3 December, 2019


If December the 1st proved anything it’s that we have now officially entered full Christmas mode.

But it all got off to a rather ignominious start in the UK after Celebration advent calendars were accused of ruining Christmas before it even began after they were busted dispensing consecutive Bounty Bars when people opened their flaps on the 1st and the 2nd.

Apparently, there was furore last year when the Celebration calendar – that includes Mars, Snickers, Twix and Maltesers – dished out the reviled Bounty on day one.

Now it appears the makers of Celebration, Mars, are taking the piss with consecutive Bounty Bars this festive season.

Apparently in the UK, the Bounty is the most hated of all the confections, even beating out the nefarious Turkish Delight and inedible Terry’s Orange Chocolate.

And Celebration advent calendar purchasers were none too happy about having to suffer the coconutty confection two days running, taking to social media to vent their fury. 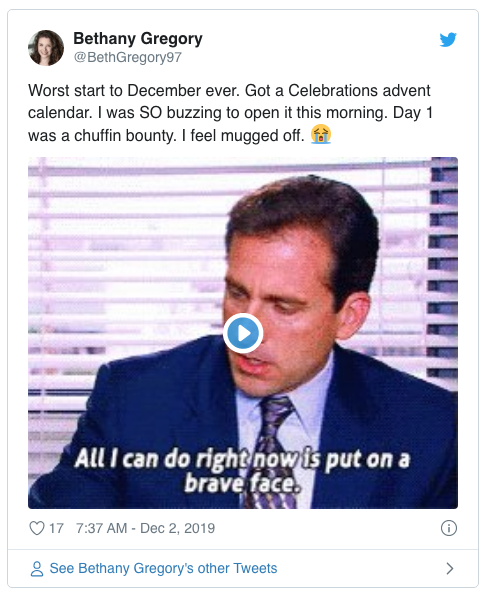 “This advent calendar could not have started any worse!! Who is the troll at Celebrations starting the month with TWO BOUNTYS????” tweeted one.

“Was excited to open my advent calendar to start the festivities and I get greeted by a BOUNTY. Way to ruin Christmas, Celebrations. Thanks, I hate it,” penned another.

While another non-Bounty fan wrote: “Just a heads up, anyone who has a Celebrations advent calendar and was disheartened that day one was a Bounty, well guess what… I got peckish and went to eat day two a few hours early and that’s a fucking Bounty too, whole calendar is going in the bin. Christmas is CANCELLED.”

Another, clearly tired of the online stink, wrote: “Don’t fucking buy a Celebrations advent calendar then if your [sic] going to moan about the chocolate in it.”

As people raged on social media, it appears the folk at Celebrations were anything but apologetic.

It replied to the angry tweets with cartoons including LOL spelled out using Bountys, a man throwing Bountys in the air with the caption “Bountys for everyone”, and two Bountys playing electric guitars with the message: “Name a more iconic duo. We’ll wait…” 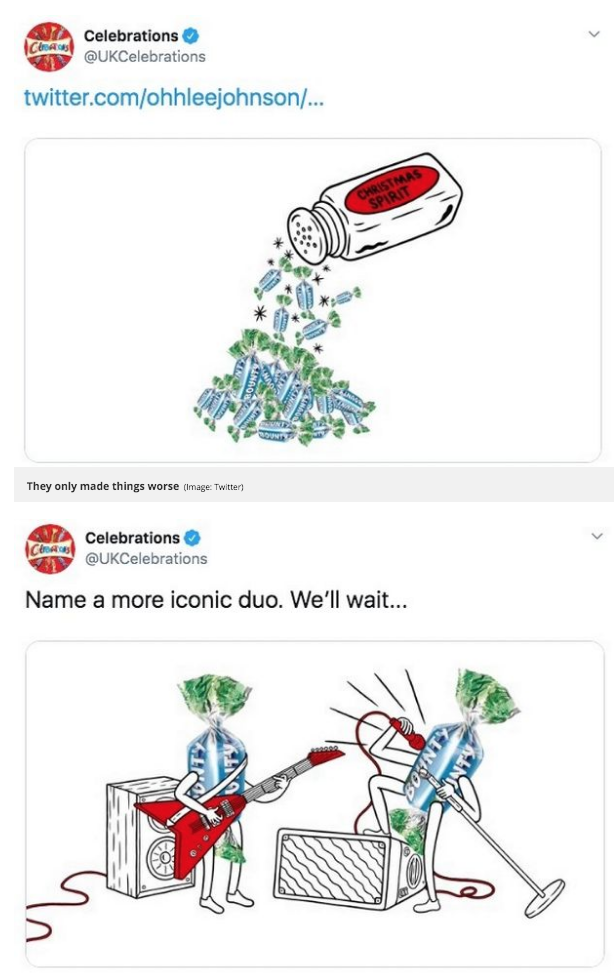 A spokesperson for Mars later added: “We all have our favourites – Bounty might be the last chocolate left in tub for some people, but for others two advent Bounty treats in a row get their season off to a great start!

“Don’t worry, there’s something for everyone in the calendar – no peeking on what comes next!”