A new Roy Morgan study has confirmed that we are indeed a nation of couch potatoes, with sitting on the couch watching TV our most popular thing to do.

The study examined what Aussies did with their 8784 hours we each get each year in terms of work, entertainment and leisure.

In the past year, Aussies spent more time overall watching television than working. We watched 18.7 billion hours of TV, compared with a cumulative 17.7 billion hours at work.

Of course, that’s not to say we all spent more time in front of the telly than at a job: in a normal week, 93% of Australians watch TV (and so average 1,023 hours each of viewing over the full year), while 59% of us have jobs (averaging 1,511 hours per employee).

Listening to radio also took up a lot of time: 15.1 billion hours in the past 12 months. Some 87 per cent of people tune in to radio during the week, listening to an average of 881 hours over the year. 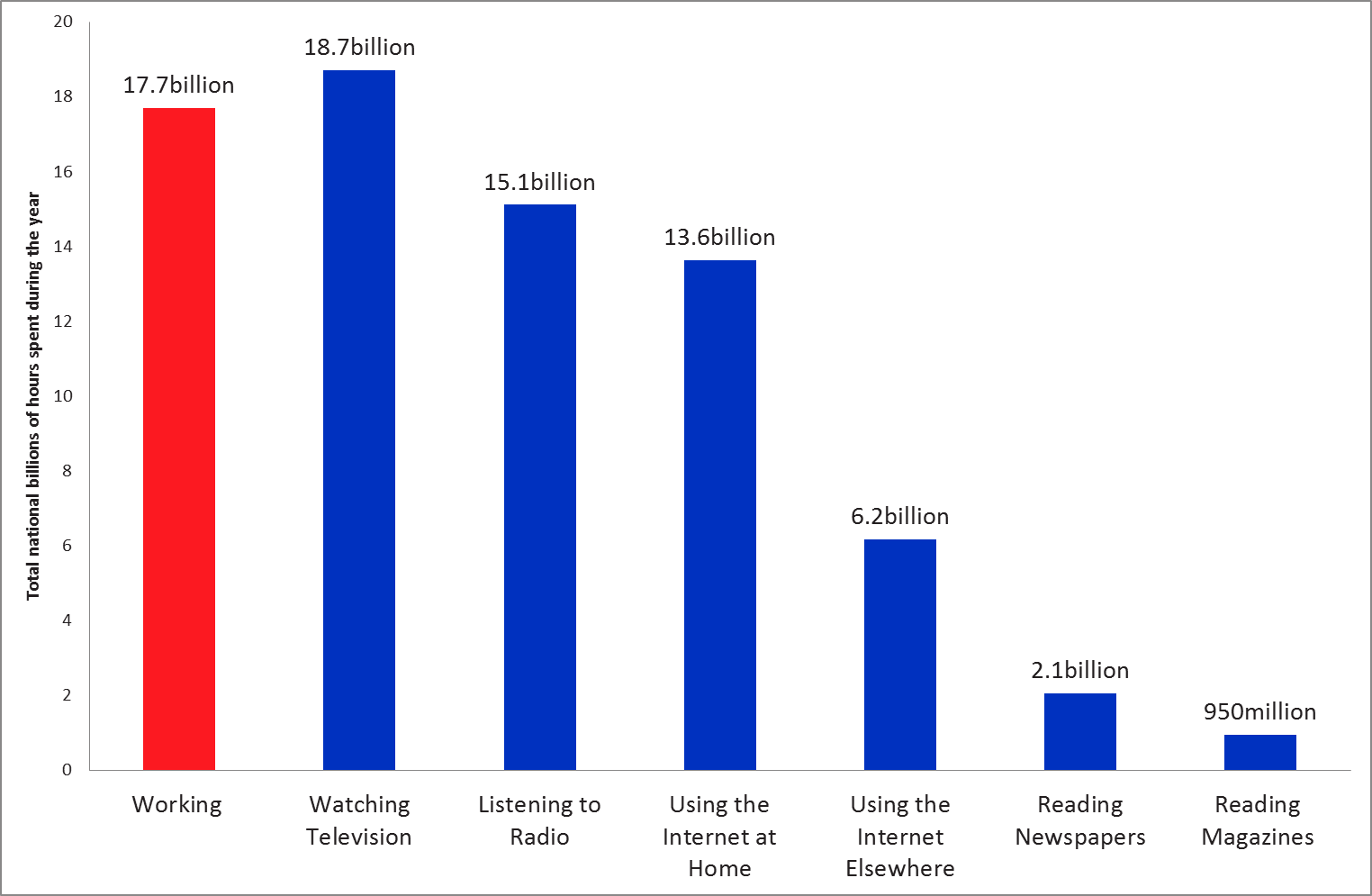 At home, our online time added up to 13.6 billion hours – plus another 6.2 billion hours spent actively online at work, school, and everywhere else. All up, the 94 per cent of Australians who go online during the week have spent an average 1,068 hours using the internet in 2016.

Not that we spend al our time sitting at home on the ouch. The study found Australians went out for food and drink over 1.25 billion times at cafés, restaurants, fast food outlets and pubs – or around 64 times each by every Aussie man, woman and teen (aged 14 and over).

Some 853 million times this year, an Australian played a sport or did some formal exercise – slightly more than the 846 million times that someone either visited family and friends, or had them over to theirs. The next most common activity, with 661 million individual occasions nationally over the year, was playing video, computer or board games at home.

We took a combined 189 million trips to the beach, 124 million to nightclubs, casinos, race tracks and clubs, 95 million to the cinema, 75 million to art galleries, museums, exhibitions and historical buildings, 50 million to the theatre, ballet, opera, and concerts, 44 million to play the pokies, 34 million to professional sporting events and 33 million to zoos, theme parks and amusement parks. These leisure outings add up to 644 million, or 33 per person over the year.

We also like to travel. Australians together took 52 million holidays during the year (over 2.5 each on average, although around three in 10 of us didn’t take any trip).

With an average of eight nights away each time, we spent 417 million of our total 7.2 billion available nights on holidays (or 6 per cent of our collective year).

In conclusion, 10 per cent of the country’s year was work, 33 per cent was media use, six per cent was holidays, and we still squeezed in 4.25 billion sporting, social, food and leisure activities.