Research fresh out of Roy Morgan has revealed the growth rate of meal delivery services like Uber Eats and Deliveroo has doubled in the last 18 months.

According to the research, Millenials and Gen Z are driving the growth, with over one quarter saying they use meal delivery services. In comparison, only 6.3 per cent of baby boomers do.

Overall, nearly four million Aussies aged over 14 use such services, compared to 1.98 million in mid-2018.

Uber Eats is the clear winner amongst the meal delivery services, with 11.5 per cent of consumers saying they use it. However, Menulog, Deliveroo and HelloFresh have also seen significant increases in usage of their services since mid-2018.

City-dwellers (23.9 per cent) are far more likely to have had their meals delivered than those in country areas (10 per cent) and Sydney (25.8 per cent) just pips Melbourne (25.6 per cent) as the leading city for meal delivery services. 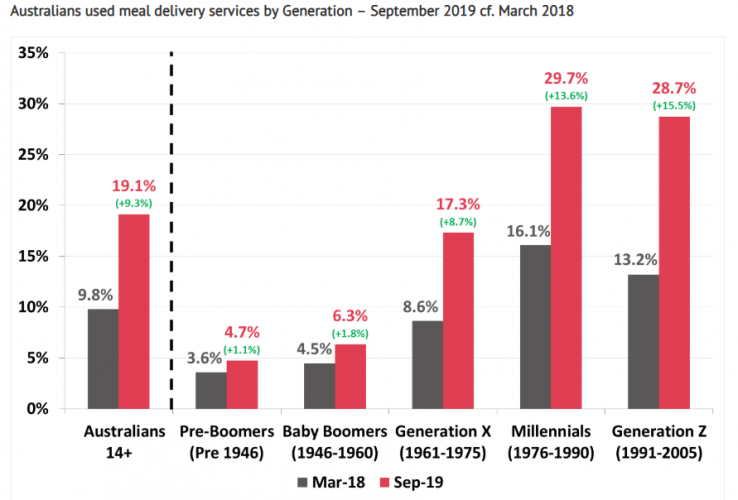 Roy Morgan CEO Michele Levine said: “Roy Morgan has closely monitored the usage of apps over the last few years and the rapid take-up of meal delivery service apps since UberEATS and Deliveroo launched in mid-2015 is no surprise.

“Uber overtook the taxis as the preferred private transport service in mid-2019 and with only a fifth of Australians now using meal delivery services there is still plenty of room to grow usage.

“Younger Australians, and many enterprising older people as well, have quickly taken to the convenience of apps available in the palm of one’s hand to streamline the use of everyday services and remove the friction that many had probably never even considered.

“This dynamic of innovation and the increasing ease-of-use for accessing services is itself creating further momentum to innovate and find new goods and services that are suited to the disruption a well-designed app can provide to remake an industry to cater for time-poor or impatient consumers.”