As you’ve no doubt been reading, KFC in the UK has gone an entire week without any chicken (caused by a delivery issue), causing stores across the country to shut and customers to fume.

Thankfully, for England’s Zinger lovers, the trucks are rolling once again and the Colonel’s finest is once again hitting deep-fryers the nation over. 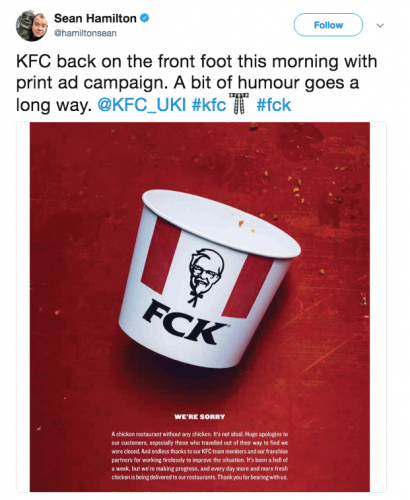 To alert customers it’s back in business (700 of the 900 stores have re-opened), the fast-food chain has taken out ads in two of the UK’s biggest newspapers – The Sun and Metro – that apologise for the debacle.

The ads feature one of the chain’s iconic chicken buckets with the logo twisted to read “FCK”. The apology read in full: “A chicken restaurant without any chicken. It’s not ideal. Huge apologies to our customers, especially those who travelled out of their way to find we were closed.

“And endless thanks to our KFC team member and our franchise partners for working tirelessly to improve the situation.

“It’s been a hell of a week but we’re making progress and every day more and more fresh chicken is being delivered to our restaurants. Thank you for bearing with us,” it read.

Meanwhile, an unnamed British woman who went global after she was interviewed by a news crew raging about the store closures and fuming “I’ve had to got to Burger King” has reportedly been offered a year’s supply of chicken by KFC’s rival.

According to reports on UK’s The Metro, Burger King’s marketing team are attempting to publicly out the woman by enticing her with a year’s supply of its tasty chicken strips.

A Burger King spokesperson telling the news site: “The disgruntled chicken fan who announced that she ‘had to go to Burger King’ after the Colonel ran out of chicken for her favourite rice-box, Burger King is coming to her rescue in her time of need…with a year’s supply of chicken strips.

“These tasty morsels will come in their own bespoke, specially designed chicken bucket, which will be uniquely created for her. That’s right, the King doesn’t chicken out, especially in times of emergency! ‘The lady will be able to claim her chicken fix whenever her cravings hit, with her VIP voucher…. for free.”

Sadly, the anonymous woman remains in hiding and has not yet taken Burger King’s poultry bait.