A new study into the social media habits of Gen Zs – those aged 12-17 – is good news for the likes of Instagram and Snapchat, however, paints a bleaker picture for Zuckerberg’s Facebook.

The report by data research firm eMarketer looked at the social media habits of teens in the UK and the US and found Instagram and Snapchat could expect double-digit growth in audience numbers.

Alternatively, the report revealed “Facebook-nevers”, users who have become “less-engaged” and are apparently leaving Facebook, logging in less and spending less and less time on it. You can read the full eMarketer report here.

In the US, Snapchat usage is expected to hit 79.2 million monthly users this year, while for Instagram it will be 85.5 million users. 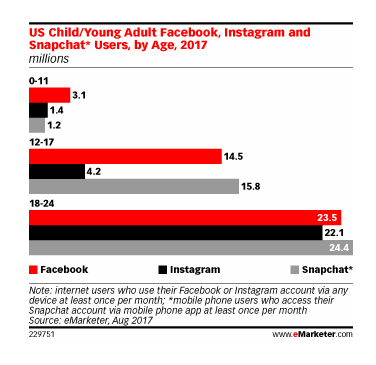 According to the eMarketer report, monthly Facebook usage figures for 12-17-year-olds will fall by 3.4 per cent to 14.5 million people in the US, and fall by 2.8 per cent in the UK.

On the upside for Facebook, Instagram (which Facebook owns) is predicted to grow its user base among under-12-year-olds by 19 per cent and 12-17-year-olds by 8.8 per cent in the US.

“Both platforms have found success with this demographic since they are more aligned with how they communicate—that is, using visual content. Outside of those who have already left, teens and tweens remaining on Facebook seem to be less engaged—logging in less frequently and spending less time on the platform.

“At the same time, we now have ‘Facebook-nevers’ children ageing into the tween demographic who appear to be overlooking Facebook altogether, yet still engaging with Facebook-owned Instagram,” he said.