In a sensational new twist to the ongoing Amber Harrison saga, new allegations have emerged alleging tens of thousands of dollars went missing when Harrison was working in London in the early 2000s.

The Australian is today reporting in 2001 a then 24-year-old Harrison was employed as a temporary administration assistant with a company called The Water Monopoly that did high-end bathrooms for posh Londoners and the aristocracy.

According to the claims, Harrison worked for the business for only four months up until Christmas 2001 and failed to return after the festive break. It was then noticed that £10,000 was unaccounted for. Remember this was 16 years ago and would tally to many tens of thousands of Aussie dollars in today’s money.

Amber Harrison has contacted the B&T office but has failed to subsequently return our calls. 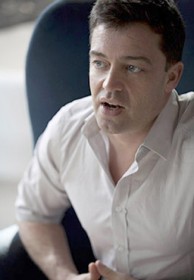 The managing director of the The Water Monopoly, Justin Homewood (above), contacted The Australian with the allegations after he noticed the ongoing press in Australia surrounding Harrison’s affair with Seven CEO Tim Worner and the ongoing legal dispute.

Harrison was also busted for misusing Seven West Media credit cards running up a staggering $534,355 while employed as a PA at Pacific Magazines from 2009 until her termination in 2014. Of the monies, Seven allege $262,000 remains unaccounted for while Harrison admitted that $54,000 of it was for personal use. She had repaid some of the money.

“She caused us a great deal of grief, upset and financial harm when I really could have done without it, when we were struggling as a business,” Homewood told The Oz.

The Australian contacted Harrison regarding the new claims and she has denied them ever taking place. “I’ve never heard these allegations,” she said, adding the claims were “a grubby attempt to defame me”.

According to the article, on noticing the missing money, Homewood reported the incident to London police in March 2002 and the file is still open.

“A cheque (was cashed), and then a proportion but not all would go into the petty cash book. But the rest of the money from the cheque was nowhere to be seen. By the time she [Harrison ]left, the petty cash was about £4000 short.”

There is also allegations Harrison then left the UK, charging a cab fare and a flight to Miami on Water Monopoly credit cards.

Homewood, who appears to have an exceptional memory of the events that took place 16 years ago over a four-month period, added: “She used to go away quite a lot on long weekends or weekends, and then she used to say she was going on hand modelling assignments,” he said. “We did sort of think she goes away a lot for a ­single person on her salary. And then she’d come back, and say: ‘I’ve been on a hand modelling ­assignment and that’s how I’ve paid for the trip. It’s one of those things you don’t question because it’s so ­bizarre.”

Homewood also claimed Harrison had said her father was a multi-millionaire hotelier and when he tracked him down in Melbourne it turned out he was employed in the maintenance department.

On the claims, Harrison said: “In the call to my father, Justin was off his face ranting and raving about me being a slut and a whore,” she said. “My father said he never mentioned anything about money going missing. (He) said he was almost incoherent. He was angry and he was aggressive.”