After a year of increasing cultural influence, Netflix tops YouGov BrandIndex’s 2017 rankings in Australia, in a list dominated by consumer digital and retail brands.

The growth in its subscriber base is reflected in its rise up the rankings. Over the past year the online streaming service has leapt from seventh to first place in the annual list, surpassing established tech giants and retail mainstays in the process. 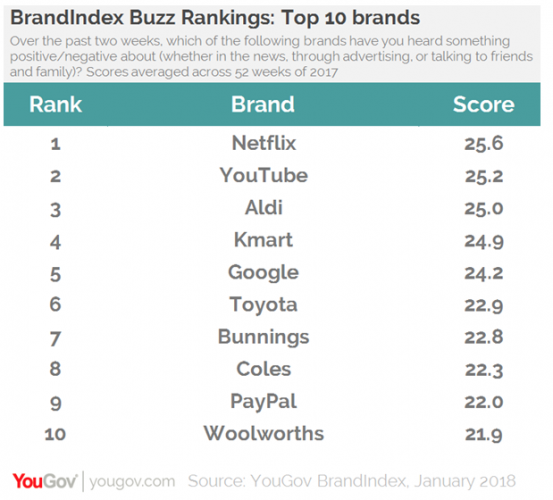 YouGov BrandIndex measures the public’s perception of brands on a daily basis across a range of measures. The annual rankings are compiled using Buzz scores from across all 52 weeks of last year. Buzz scores measure whether people have heard anything good or bad about a brand during the previous two weeks.

The Australian top 10 is dominated by consumer digital brands and retailers. YouTube ranks second, Google fifth and PayPal in ninth. While Aldi is in third, Kmart fourth, Bunnings in seventh, Coles in eighth, while Woolworths is tenth.

In addition to the overall list, YouGov BrandIndex also unveils the top ten most-improved brands in Australia – based on those that achieved the biggest improvement in their Buzz scores over the course of 2017. 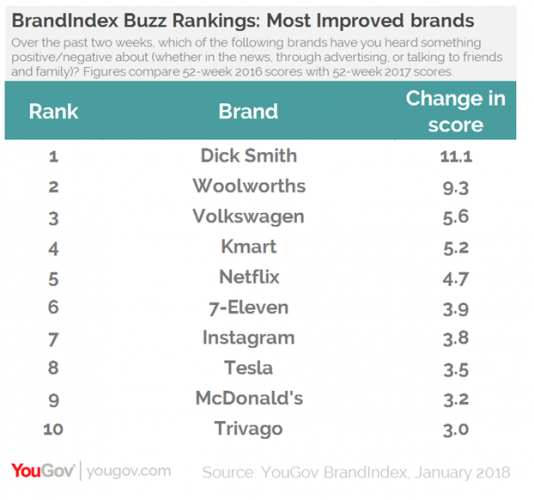 The most surprising result this year is the improvement in the Buzz score for Dick Smith.  The home electronics retailer has had a chequered history since it was formed in 1968.  After its initial success, Dick Smith’s connection to the company ceased in 1982 when the company was sold to Woolworths.

In 2016 the company went into receivership and the Dick Smith brand was later acquired by online retailer Kogan.

According to David Briggs, managing director of YouGov Galaxy, “It would appear the new owner will benefit from Dick Smith’s campaign to limit immigration into Australia.  The entrepreneur invested $1 million in press and TV ads and while the campaign attracted criticism it was successful in raising his profile in the media.

“It would seem that Australians still have difficulty in differentiating between Dick Smith the person and Dick Smith the retailer, and the winner in this case is Kogan as they will benefit from the buzz that Dick Smith has created,” he said.