In a 17 minute long video on her YouTube account, O’Neill explains her reasoning behind leaving the platforms, saying due to her career being in social media, she has a different insight into that world than many others.

“I have a whole career built around social media,” she said in the video, “what I’m doing scares the absolute fuck out of me.

“Taking myself off social media is a wake-up call to anyone and everyone who follows me.”

The passionate clip describes O’Neill’s modelling career, the obsession with getting likes and followers, and how social media is a business, and one in which companies and brands are exploiting.

She goes on to explain how the companies would tell her what to post, when to post, how to arrange the image.

However, her reasoning for quitting goes beyond the companies, she said. “I quit social media because of my 12-year-old self.”

The video has already been viewed more than 1.5 million times. Watch it below.

O’Neill has also launched a website called Let’s Be Game Changers, striving to change and talk about challenges in the world.

The BBC reported O’Neill had re-edited the captions of many of her photos – which would show her doing yoga, taking exercise selfies, posing in nice dresses etc – to show the manipulation behind such images.

While her Instagram account currently only has two images on it, as the rest have been deleted, one such example of a re-edit is below. 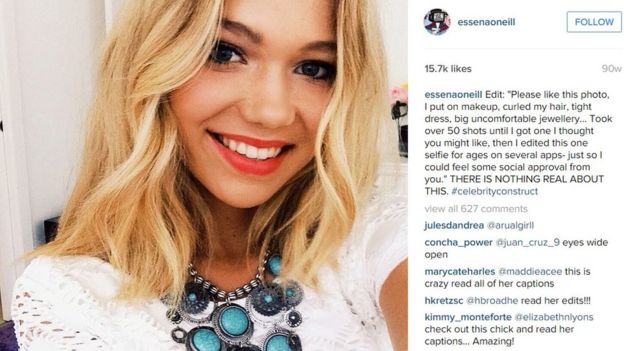 Image sourced via the BBC.
Advertise with us
Connect with:
LinkedIn