Roy Morgan has released the latest readership results for Australian newspapers for the 12 months to March 2019.

Over 15.7 million, or 76.3 per cent, of Australians aged 14-plus now read or access newspapers in an average 7 day period via print or online (website or app) platforms, a fall of 2.2 per cent from a year ago.

These are the latest findings from the Roy Morgan Single Source survey of 51,362 Australians aged 14-plus in the 12 months to March 2019. 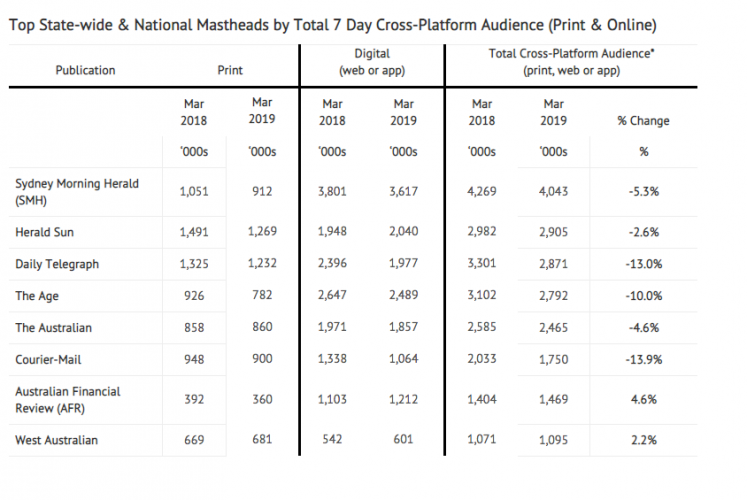 Print Newspapers now read by a third of Australians (6.8 million)

Weekend Newspaper Readership down, Sydney’s Sunday Telegraph is most read

There were two weekend newspapers to defy the broader industry trends with the Saturday Adelaide Advertiser increasing its readership by 2.2 per cent to 327,000 and the Sunday Times in Western Australia which now has a print readership of 340,000, up by 1.8 per cent from a year ago.

Another strong performer over the past year was Schwartz Media’s The Saturday Paper which increased its readership by 8.3 per cent to 131,000.

The Financial Review Magazine has had a good year increasing its readership by 1.2 per cent to 406,000. However, although down 13.8 per cent, Good Weekend clearly remains Australia’s most widely read newspaper inserted magazine with print readership of 1,006,000.

Real estate focused magazine Domain is the second most widely read newspaper inserted magazine in Australia with an impressive readership of 725,000 in the year to March 2019.

North Queensland’s Townsville Bulletin had the most impressive readership growth over the past year of all regional titles with an increase in readership of 26.5 per cent to 43,000. The Hobart Mercury increased weekday readership by 6.1 per cent to 52,000 in the year to March 2019 to become Australia’s equal second most widely read regional weekday masthead behind the Newcastle Herald. 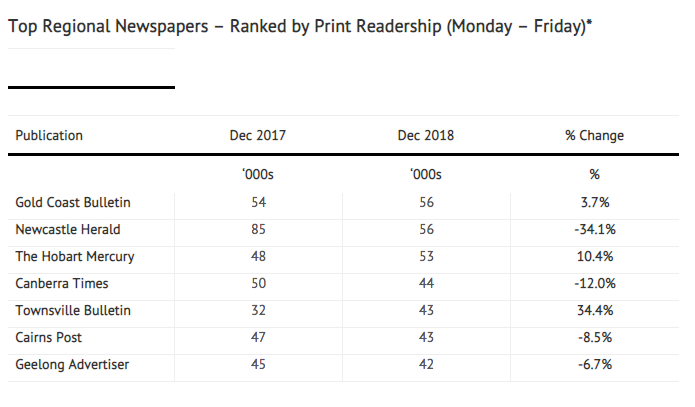 Despite a decline in readership over the past year the Newcastle Herald – which as part of the Australian Community Media regional and community newspapers was recently sold by Nine Entertainment Company to businessman Anthony Catalano for $125 million – remains Australia’s most widely read regional title with a print readership of 56,000 (down 29.1 per cent).

Another bright spot for regional titles was the NT News based in Darwin which increased its readership by 13 per cent to 26,000 in the year to March 2019.