There’s panic on the streets of London as many KFC stores in the capital, and the UK over, have been forced to close after a national delivery strike saw the fast food chain run out of its world famous chicken.

And English KFC fans are none to happy about going without their daily dose of Zingers – calling the police and even petitioning their local MPs out of sheer desperation for the secretly herbed goodness.

Customers have been voicing their despair, with some calling the closures an “apocalypse”, or dubbing the incident “the great KFC crisis of ’18”.

More than 600 of its 900 UK stores have been forced to close as a new delivery contract with DHL sparked chicken shortages across the country. 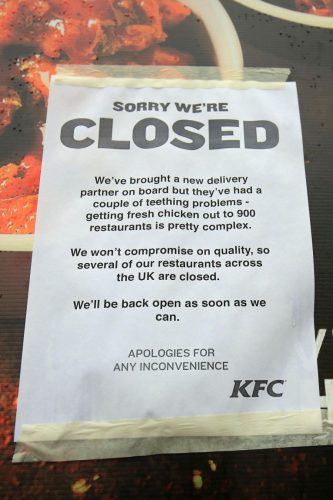 London police at Tower Hamlets have been forced to issue a statement telling frustrated customers that fried chicken is “not a police matter”.

A spokesperson for London’s Metropolitan Police said: “(The) Tweet was gentle reminder that nuisance calls are not welcome but detract from responses needed for serious calls to police.”

The local MP for London’s Bermondsey electorate, Neil Coyle, said his constituents had also been contacting him about the lack of nuggets, tweeting: “I’ve been contacted by disappointed #KFC customers on Borough High Street.” 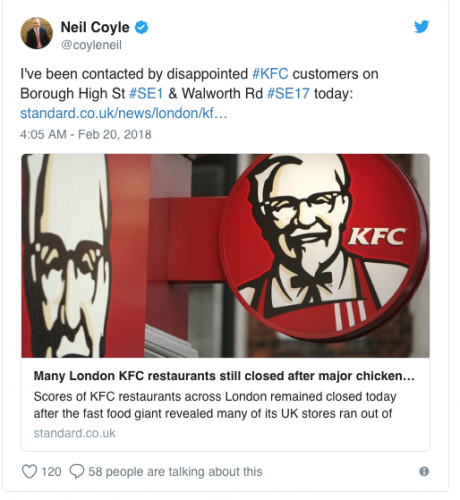 A KFC spokesman said in a statement: “We’ve brought a new delivery partner on board, but they’ve had a couple of teething problems, getting fresh chicken out to 900 restaurants across the country is pretty complex!