An outdoor campaign for a chain of London gyms has been slammed for promoting its exercise classes by comparing it to sexual harassment in the workplace.

Gymbox, that operates 11 gyms in the capital, wanted to spruik new memberships for the New Year and ran a billboard campaign targeting females. 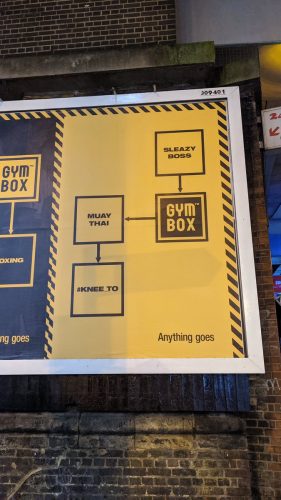 Despite the apparent attempt at humour, people are rightly pointing out that being sexual harassed is no excuse to sign-up for a gym membership.

The ad was spotted by London-based journalist Moya Lothian-Mclean who posted it to Twitter alongside the caption: “Are you kidding me? Gymbox advertising themselves by saying if you get sexually harassed at work… go work out.”

Additionally, the billboard also features two other reasons for why people should work out, including for kids who are bullied to learn “boxing” to gain ‘respect’, as well as for men who have a “fetish for women’s clothes” but find “nothing fits”.

Lothian-Mclean quickly found supporters online. “Sexual harassment is not a marketing tool,” penned one. While another added: “Also is this their attempt at a ‘progressive’ ad? Plz stop paying ad execs a squillion dollars.”

Apparently Gymbox has a history of controversial advertising. In 2009 it found itself in hot water with UK’s Advertising Standards Authority after it promoted its boxing classes alongside the tag, “Beat up Chavs. Why hone your skills on punch bags and planks of wood when you can deck some Chavs.” A “chav” is a young, loud person often from a poorer socio-economic background. Despite complaints from the public, the watchdog ruled in favour of Gymbox.