It’s the faeces that has gripped the nation (and the world judging by overseas news reports), who exactly is using Roxy Jacenko’s office entrance as their own personal lavatory?

As B&T’s very own investigative reporting has revealed, a mystery woman – caught on CCTV – has repeatedly defecated out the front of Jacenko’s Sweaty Betty offices in Sydney’s swanky suburb of Paddington. 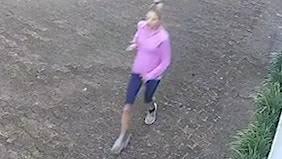 The unidentified lithe blonde has reportedly delivered her calling-card a number of times in the past four weeks, apparently after going for a 6am jog.

When Jacenko posted the footage of the woman on her Instagram account in an effort to “name and shame” the perpetrator many suggested the serial pooper bore an uncanny resemblance to none other than KIIS radio host, Jackie O (Henderson).

Adding another layer of intrigue to the ongoing and whiffy saga (police are now investigating), Jackie O used her radio program yesterday to deny that it was her in the damning footage.

Jackie O read out a number of news headlines to her breakfast audience that had inferred she was the culprit. Apparently, both Channel Seven and The Daily Mail had actually named O as the mystery woman.

Adding spice to the theory, an old story from 2015 resurfaced where O actually admitted to having an “accident” in her pants in Sydney’s eastern suburbs and subsequently “had to take off my jeans on the street and I thought, ‘I’m not going to get back in the car with all of this squished in my pants,’ so I dumped it on the cul-de-sac.”

Yesterday, O told her KIIS audience: “Anyway, so Roxy then said on our show yesterday, as a joke, she said: ‘I had to delete the video because everyone was saying it was Jackie O. Then all the articles came out yesterday where somehow I was the poo jogger.

“My mum even called me yesterday and asked, ‘What’s going on? Am I the poo jogger? My own mother! She thought someone was starting a smear campaign against me.

“All these articles came out yesterday where somehow I was the poo jogger,” she told her KIIS listeners.

“This one was on Seven News, ‘Roxy Jacenko Deletes Poo Jogger Video After Claims Jackie O Was Behind The Act.’”

“Well can I confirm it myself then? I am not the poo jogger. Okay? It’s not me!”

O then added: “It’s some other girl. She’s way skinnier than me by the way.”

Jacenko then texted O during her broadcast, which was also read out on air. “She’s just texted me. She said, ‘Don’t worry, I know you’re not the poopinator’,” the text read.