Advertise with us
Posted 1 February, 2018


Final numbers from OzTam have confirmed that the AFL grand final was the most watched TV show of 2017. 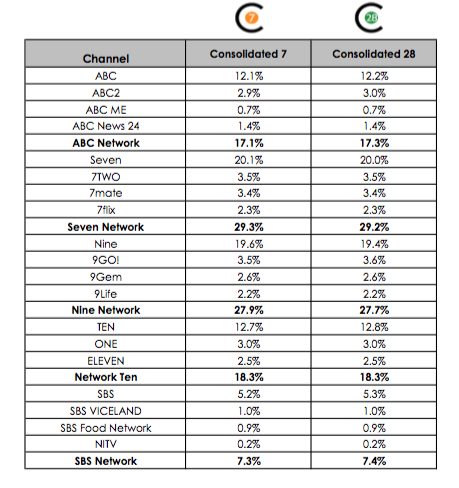 Of the top 20 most watched programs of 2017, 11 of them were sporting events, while Nine’s Ninja Warrior proved its value snaring a phenomenal six spots in the year’s top 20. Interestingly, it’s been revealed that both Seven and Ten passed-up on Ninja before Nine decided to take a chance on the show.

Seven, of course, has had to scramble into the space, announcing it’s snared the rights to the Ninja knockoff Australian Spartan for 2018. Neither networks have announced launch times.

Seven and Nine ruled the top 20 list, with Ten’s only entrant being the final of The Bachelorette starring Sophie Monk. The ABC or SBS did not feature. Check out the top 20 shows for 2017 below:

However, 2018 may be a different story, with analysts predicting that Nine is looking the goods to take the audience and revenue crown back off Seven.

According to an analysts report by Deutsche Bank using data from Free TV Australia, both the Ashes and Married At First Sight will have Nine in the box-seat moving into the first quarter of the year. That said, Seven can boast the tennis and MKR over January.

Author of the report, Entcho Raykovski, was quoted in Fairfax Media as saying: “We now expect Nine to have 39 per cent market share in fiscal 2018 (previously 38.5 per cent), with the gains coming at the expense of Seven.”

When the Deutsche Bank released its analysis this week, Nine shares recorded an almost eight per cent jump, while Seven also recorded a small increase.