FreeWheel, a Comcast company and the industry’s most complete advertising management solution, has announced the launch of its Q1 2019 Video Marketplace Report, which shows a rise in targeted and addressable advertising as publishers and marketers increasingly look to efficiently reach audiences.

In Europe, there is a focus on data-driven targeting and automation as a growing number of publishers adopt an audience-first approach. Total ad views grew 13 per cent, but live ad views increased by 78 per cent year-over-year.

Audience targeted campaigns also grew above the market growth rate, rising 56 per cent as publishers increase the use of data to make premium video addressable.

Programmatic has experienced significant growth, increasing 31 per cent year-over-year – four times the rate of direct sales – as publishers strive to automate and drive efficiencies in the buying process.

“Data-driven advertising is changing the way advertisers and publishers approach premium video, as a growing number adopt an audience first-approach. With continued improvements and advancements to the tech stack across multiple endpoints the outlook for premium video looks very promising through the rest of the year and beyond.”

The enabling of premium video inventory across Set-top Box Video on Demand (STB) and Connected TV (CTV) once again demonstrated the power of the big screen, together accounting for the largest share of ad views at 45 per cent.

There is also an ongoing drive towards shorter ad breaks. Total ad break durations were around 94 seconds and there was an average of four ads per midroll break, with 42 per cent of all midroll breaks containing two ads or less. 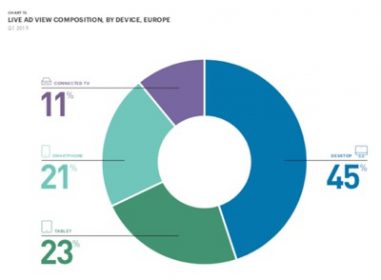 Other findings from the report included:

The FreeWheel Video Marketplace Report is released quarterly and highlights the changing dynamics of how enterprise-class content owners and distributors are monetising premium digital video content. The data set used for this report is one of the largest available on the usage and monetisation of professional, rights-managed video content worldwide, and is based on census-level advertising data collected through the FreeWheel platform.