Advertise with us
Posted 3 December, 2018

As a result, total agency bookings are back to levels not seen for three years and we have the rare situation where every major media is reporting lower year-on-year bookings.

To better illustrate the changing trends, SMI has produced a chart which shows how the October months in 2016 and 2017 were abnormally inflated by extra advertising relating to the Same Sex Marriage and that associated with football finals.

“Ad spend in the month of October 2016 was abnormally inflated by the football finals for both major codes occurring in that month, when usually those finals are held in September,’’ SMI AU/NZ managing director Jane Ractliffe said.

“So while the lower bookings seen this month are disappointing, the reality is that the market has returned to normal growth trend levels as seen in the SMI over at least the past nine years.’’

And when government category bookings are removed to show the underlying trends given the recent removal of the Federal government’s ad spend from the data, the trend remains consistent with the total market back 9.1 per cent. 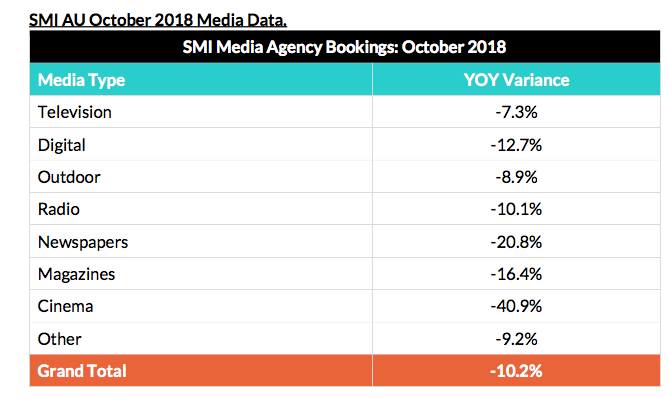 “The October month was noticeable for large declines in ad spend from the food/produce/dairy and domestic Bank advertisers, with the only positive news coming from a surge in spending by Retailers, the Home Furnishing/Appliance sector and Utilities,’’ Ractliffe said.

The softer October demand has set up the 2018 year to be one of two halves, with the market growing 5.5 per cent in the first half of the year, but in the current financial year it’s back 1.8 per cent.

But that earlier growth means that at least for the calendar year-to-date (Jan-Oct) period the market remains at record levels with total bookings up 2.4 per cent at a record $6 billion.