Advertise with us
Posted 1 February, 2019

Australia’s media agency market has maintained its unblemished record of market growth, delivering its sixth consecutive year of higher advertising expenditure in CY2018 with the total lifting 1.9 per cent to a new record of $7.02 billion.

Most of the growth was concentrated in the first half of the year (up 5.5 per cent to $3.5 billion) with bookings for the six months to December more subdued (down 0.4 per cent) as the large categories of domestic banks, insurance and food/produce/dairy significantly reduced their media investment. 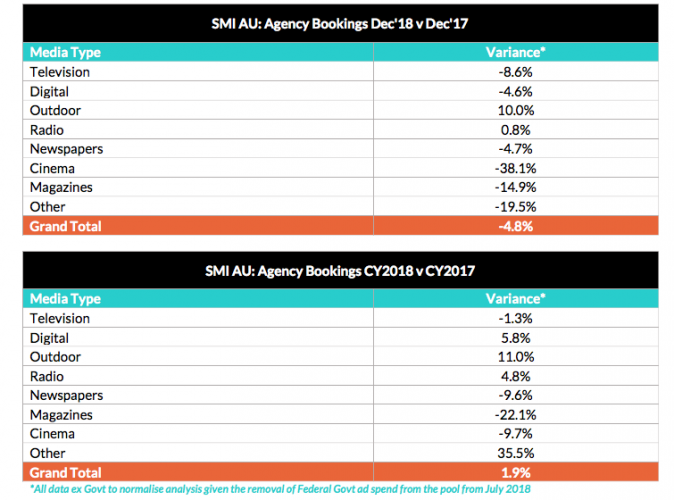 The CY2018 year featured many notable milestones, including:

But the year ended with a softer month in December (demand down 4.8 per cent), although there was continued improvement in metropolitan press with total spend back just 1.1 per cent. And while total TV bookings for December were back 8.6 per cent, each of the Seven, Prime and Foxtel businesses reported hugely positive results off the back of the new cricket broadcasts.

Total bookings for the fourth quarter are back 3.3 per cent mostly due to large declines in ad spend from the domestic banks (down 23.4 per cent), food/produce/dairy (down 15.6 per cent) and restaurants (down 13.4 per cent) categories.

SMI AU/NZ managing director Jane Ractliffe said the fact the agency market had hit yet another record level of ad spend again proved the ongoing strength of the industry and its ability to evolve to meet advertiser and market needs.

“We’ve seen Agencies spending more on Metropolitan TV for the third year in a row while also branching into new media services such as Podcasting and Digital Outdoor as clients continue to test new services to gain the best value from their advertising investment,’’ she said.

And Ractliffe said the year was also notable for a significant change in growth drivers within the digital media, with search and social media bookings delivering the highest growth.

“The Search media returned to very strong growth in 2018 after a more subdued 2017 while Social Media maintained strong double-digit growth across both years,’’ Ractliffe said.