A company in the UK has come under fire for a ‘sexist’ ad plastered in London Underground stations after it was to found to be perpetuating harmful gender stereotypes.

The ads show a female entrepreneur smiling with the copy: “You do the girl boss thing… We’ll do the SEO thing”.

The Advertising Standards Authority (ASA) said it received 19 complaints that said the ad as patronising to women, implying women are not tech-savvy and don’t know anything about SEO.

In June last year, the ASA revealed new guidelines which stated ads “must not include gender stereotypes that are likely to cause harm or serious or widespread offence”.

The company in question, People Per Hour – a community freelancing website, said the term ‘girl boss’ was a reference to a book, popular culture movement and professional network. 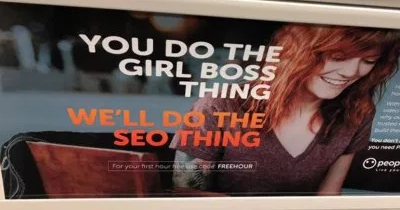 The company, however, acknowledged the “execution” might have “initially come across as sexist and demeaning to women” and has since removed the word ‘girl’ from the ad, while also issuing an apology on its website.

The ASA deemed the ad featured well-established stereotypes that men are more technical and that the term “girl boss” implied a woman’s gender was important to their performance in an entrepreneurial role.

It likewise ruled the phrase ‘We’ll do the SEO thing’ would be understood to mean female bosses need external help when it comes to technological issues.

The ASA said: ‘We acknowledged the steps taken to rectify those issues by removing the word “girl” from the ad and issuing an apology.

“However, for the reasons given, we concluded that the ad had the effect of reinforcing harmful gender stereotypes and that it breached the code.”