Aussie comedienne Judith Lucy has made a career out of gags relating to her spinsterhood and lacklustre dating history, and now a new campaign is calling for the 51-year-old to be named the next Bachelorette on 10’s infamous dating show.

A Change.org petition calling for Lucy to front next year’s series has already garnered close to 7000 signatures (at time of writing). You can – and possibly should – sign it here.

The idea of Lucy fronting the show was first mooted on Virginia Trioli’s ABC Radio show. Children’s book author and Lucy fan, Nelly Thomas, thought it was such a good idea she started Change.org petition to make it happen. 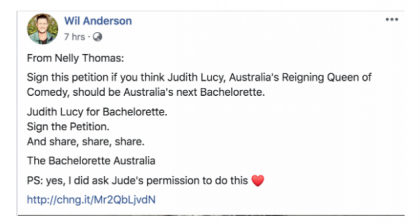 B&T has contacted 10 for comment, however, had not received a reply at the time of publishing.

And it’s probably not a bad idea. Lucy would undoubtedly project new vigour and humour into the show and would make a refreshing change from the preening 20-somethings that regularly appear on these sorts of programs.

That said, it would fly in the face of 10’s motto of being the channel for the “under 50s”.

As the petition states: “Time to get this woman back in the game with some quality Aussie blokes. They’ll be lining up- and at their age they’re probably not ever trawling for Insta followers!

“As a single woman over the age of 30, Judith would be a relatable — but revolutionary — presence on a television dating show.”

And Lucy’s take on it? Apparently, she’s bemused by the entire idea but hasn’t ruled out the idea should 10 executives come knocking with a sizeable cheque.

However, social media users appear to be divided on the idea.

“Please, dear god, no,” penned one dissenting voice. While another non-fan added: “Oh, sorry, but I couldn’t think of anything worse!”

But the idea also found plenty of fans, too.

“I would watch the shit out of this,” one Twitter fan wrote.

“As far as petitions to shake up Australian TV go… this is by far my favourite!” penned another.

“Finally a cause I can get behind,” said another fan.