B&T’s regular contrarian and columnist, Robert Strohfeldt, has been hobnobbing around Europe on holidays. But fear not Strohfeldt fans, he’s back and in his latest piece argues if data has given us ONE thing it’s a whole world of clichés and catch phrases…

Whilst overseas recently I was watching BBC World Business News and the second story was on Big Data. (Nothing new in that, every second business story today is on Big Data). 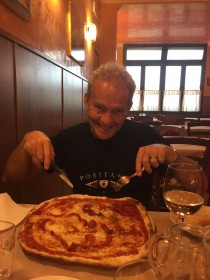 By analysing big data, JC Penny “discovered” they were selling large amounts of sheets, bedding and other similar merchandise to hotels. As a result, they had decided to set up a wholesale division, dedicated to hotels and hospitality. I was staggered. This was the second biggest story on the hour of BBC International Business News. A bunch of back room analysts had discovered something that 20 years ago, people would have been fired for NOT seeing.

A recent report by IBM stated: Every day, we create 2.5 quintillion bytes of data.1 To put that into perspective, 90 percent of the data in the world today has been created in the last two years alone – and with new devices, sensors and technologies emerging, the data growth rate will likely accelerate even more.

The fact they do not include is that about 95 per cent of this data is irrelevant/useless. For a company such as IBM, the more data produced the better. No wonder the people from JC Penny had not spotted the bleeding obvious. It was buried in a ton of useless information.

The new gold rush is data and analytic tools.

I have said this many times – data is not about quantity, rather quality. And the greater the quantity, the more difficult it becomes to spot the quality.

Only a fool would state that customer data is not a mandatory in developing strategy. But more does not equate to better.

Marketers have been using data (both primary and secondary research) since “marketing” was first developed by the packaged goods (FMCG) companies such as P&G.in the 1950s.

Data/information/insights or whatever terminology you want to use, is not a recent phenomenon. (Though one could think this is the case by the sheer volume and emphasis placed on the topic today).

Advertising has been termed “where science meets art”, since I first joined an agency in 1983. (And a research firm as mathematician fresh out of university in 1980, from when I first started working with data bases.)

Yet I see start up agencies basing their point of difference on using science and art. (Creative).

But the meaning of art is not confined to creativity. There is the “art” of selling for example. A good salesperson can intuitively sum up a customer and know how to best deal with them. And they will tell you that although there are vagaries between how best to deal with individuals, people have more in common than difference.

It is the “art” of interpersonal relationships that is being lost to data analysis. The IBMs of the world will tell you how important data is and the more you have the better. (That is their business after all).

Again, taken from a recent report: For example, a customer’s app behavior should trigger email campaigns. SMS clicks should inform desktop web content. Facebook messenger Bot interactions should determine when a customer gets a customer service phone call. If a customer recently shopped in a store, that individual should receive a “drive to store” message the following day.

Really? Do you want a “drive to store” message the following day from every store you visit? This will more than likely piss people off. How much junk do you receive now? But here is a new data programme that will add to that.

Integration (was called Above and Below the Line) was something nearly all marketers subscribed to. Ensuring your mainstream advertising, DM, promotions, PR etc. all worked together to a common narrative objective was a given.

Today, with such a fragmented media/channel landscape, this is more challenging, yet the basics still apply.

We are being blinded by too much data. And the companies selling the tools to collect, analyse and respond are growing fat on the profits of burying you in numbers. (And taking your focus from the customer to the spreadsheet).

But dumping volumes of data upon us is not complete without the accompanying buzz words and phrases. Let me go to town here with a few examples of cognitive diarrhoea:

The beauty of cognitive technologies is that data of all types from practically all sources — structured and unstructured — can be correlated and analyzed, creating unique insights. I’m talking about insights into emotion, attitude and tone – elements that can bring you closer to your buyers. The potential for marketers is enormous as we access these new data types and gain new awareness of feelings, motivations and behaviors. (New feelings and behaviours? Have we morphed into a different species?)

And then we have:

Many companies make the mistake of trying to dictate the message rather than letting influencers speak in an authentic way to their audience. It’s a natural instinct, which is why it’s so important to ensure you select the right influencers.

To that end, remember that the number of followers an influencer boasts isn’t nearly as critical as whether he or she has the followers you want to interact with and a strong understanding of the content you wish to communicate. To aid you in this pursuit, cognitive technologies have emerged that enable you to analyze unstructured data from a potential influencer’s social media feed and identify key characteristics that resonate with a target demographic (Don’t worry about a consistent brand message. Just select a bunch of people, wind them up and let them go. Influencers, brand ambassadors or whatever you want to call them have been around since Jesus played fullback for Jerusalem. AND, in every case, their profile and message was consistent with the core brand message and policed to ensured continuity. Relevance was and still is, the governing criteria.)

You could let the “back room people”, hack their way through tons of data, OR, do a series of in-depth and group discussions with your front-line sales staff. It doesn’t have to be a case of either or. If the data is telling you something different to what your experienced front line people are, check the data.

These are only a few examples – I could grab hundreds of pages of similar quotes and “pearls of wisdom”. But hopefully these are sufficient to make the point.

We are descending into a data driven world of clichés and catch phrases. And the perception that data programmes using AI, remove the need for people to “think” – feed the data in one end and the golden insights that come out the other.

Generally speaking, the more information you have (no matter the field of endeavour), the better the decisions you make. But there is a point at which information overload kicks in. The data explosion has also played a significant role in the switch many advertisers have made from longer term strategic to shorter term, tactical thinking and activities.

Politicians are so often derided for following and being driven by the 24- hour news cycle at the expense of longer term thinking. Marketers are equally guilty, as the political classes long ago adopted marketing and advertising techniques to “sell” their policies and people.

Paul Keating once famously said “politicians today want to run focus groups before they decide whether to get out of the right or left side of the bed.”. At least they were talking to real people rather than pouring over numbers.

Yes, data is vital to the development and implementation of successful marketing and communications campaigns. But rather than data, “information” should be the driver. And information comes from a variety of sources, not just AI computer modelling.

We are a long was off seeing AI replace RI. The only beneficiaries of this approach are the vendors of the hardware and software. The new “snake oil” sales people.