A British woman whose dress was insulted by a Tinder match has had the last laugh after global fashion giant ASOS used her image to advertise the dress on its website.

The 20-year-old shared a screenshot of the message from a random Tinder match, along with with the caption “men are trash” after the man said her dress looked like a “charity shop job”. 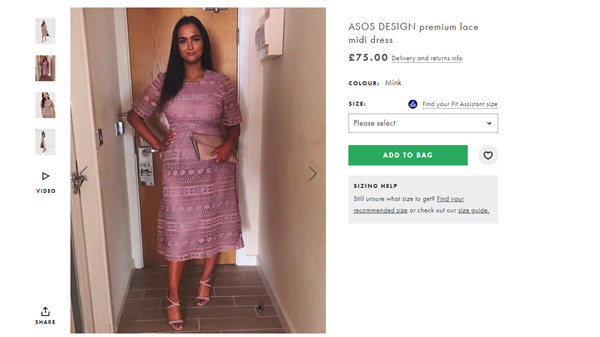 Thea Chippendale, from Lincoln, posted a tweet revealing the messages she’d received from a man on Tinder called George.

He sent her a message saying: “That dress in the last photo is not doing any favours. Hope that helps.”

When Chippendale asked why he felt the need to comment on her appearance, he said: “Literally had to tell you else I wouldn’t have slept.

“It’s awful you not reckon? Charity shop job! I tell you what… grow up! And shop somewhere decent.”

Chippendale uploaded the message to Twitter, which has since gone viral with more than 107,000 likes and 13.4K comments.

Men are trash. (Included the pic he’s on about 🙃) pic.twitter.com/3pi6NHl0Oy

The best revenge, however, was when ASOS messaged Chippendale asking if she’d like to be on the product page advertising the dress.

Last Thursday, the fashion retailer tweeted her to show it was using her image on the page the outfit was being sold.

ASOS tweeted alongside her picture: “Swipe right to see who had the last laugh.”