The box has finally arrived and slipping on the Google Glass, Technical Director Julian Thomas from Brisbane-based agency BCM already sees some issues with the wearable tech.

There has been a fair bit of anticipation and curiosity around Google Glass as a device and whether it will have a place in mainstream society alongside smartphones and smartwatches.

This curiosity is fuelled by the very fact that Glass is the first of its kind and we have nothing to compare it with. With this in mind it comes as no surprise that Google has staggered its release, either through fear that Glass could be seen as a novelty, and that a global release could see demand fall short of expectations, or that by releasing it slowly and carefully will build up more hype and interest.

Either way, we are lucky to get our hands on it and can’t wait to begin testing. 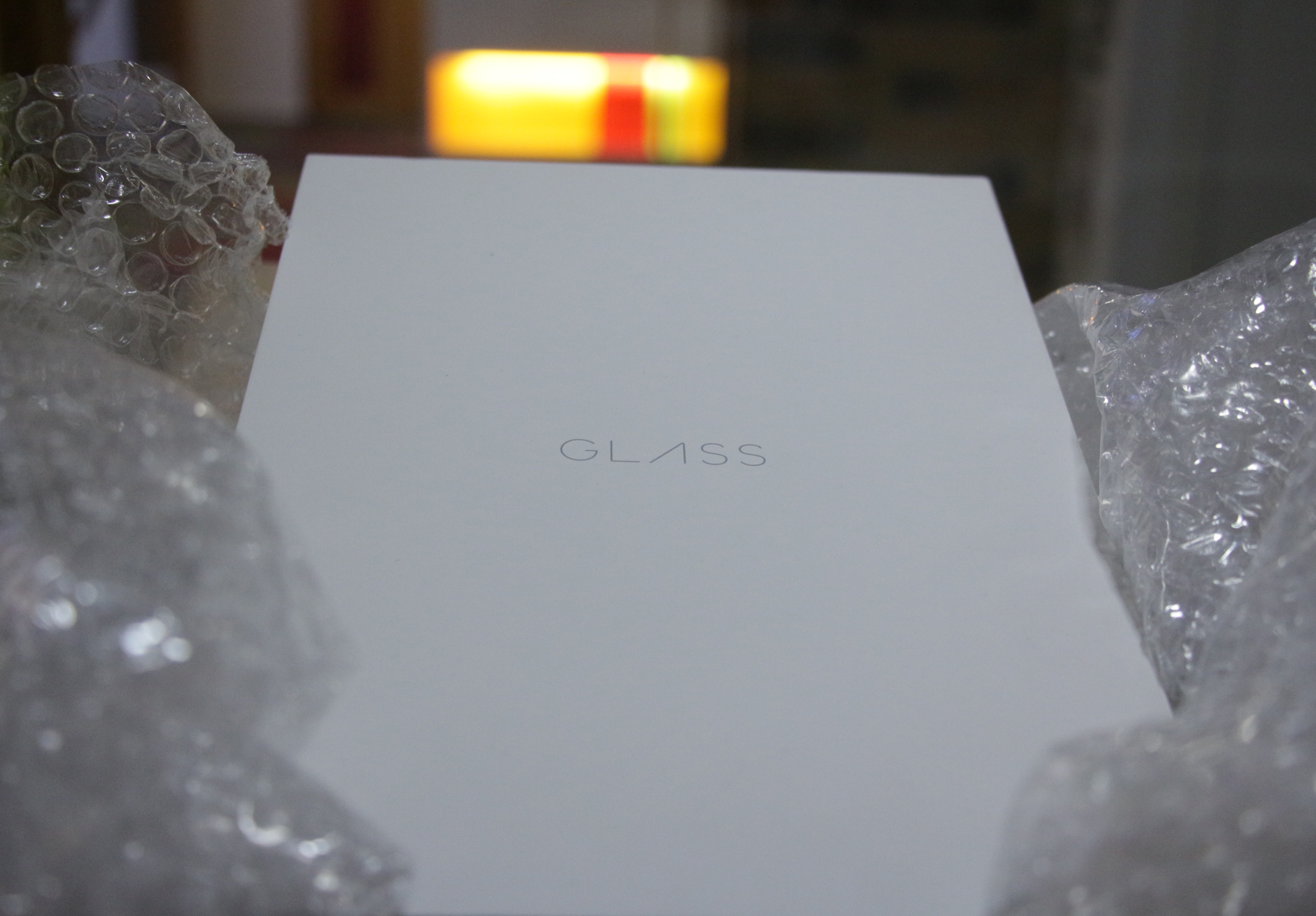 Out of the box, my first impression is that despite reports of how alien this device looks when people are wearing it, as a piece of technology, this is really impressive. The amount of componentry built into the device with the space available is pretty amazing and to be honest for a first of its kind, I feel that the design is pretty clean.

Not only that, but putting it on I was worried that because all of the componentry is on the right-hand side, it would feel unbalanced, but this is not the case and I can see that wearing Glass will at least be comfortable. Anyway it’s early days so let’s see.

Before firing up Glass a small amount of configuration to the nosepiece and position of the screen is needed, so that the screen is in the optimal position to my field of view. The screen should be clearly visible whilst not obstructing the user’s vision.

Starting up the device, the screen displays the Glass logo and for the size of the display, the picture is surprisingly clear and like any new device a series of steps need to be completed in order to set up Glass. One of the requirements is to download MyGlass to your Android or iPhone so that the user can sync their phone to Google Glass in order to download apps, receive emails, make and receive calls, SMS and more.

The final component I configure is the wink detection. Now for some, Glass already is a little creepy, so setting up wink detection that can be used as a cue to take a photo could be a step too far but let’s test it out first and not be too hasty to judge. I call out to another BCMer across the room and give them a slow wink. This is followed by a look of confusion and disgust. Maybe the wink gesture could be a little disconcerting. 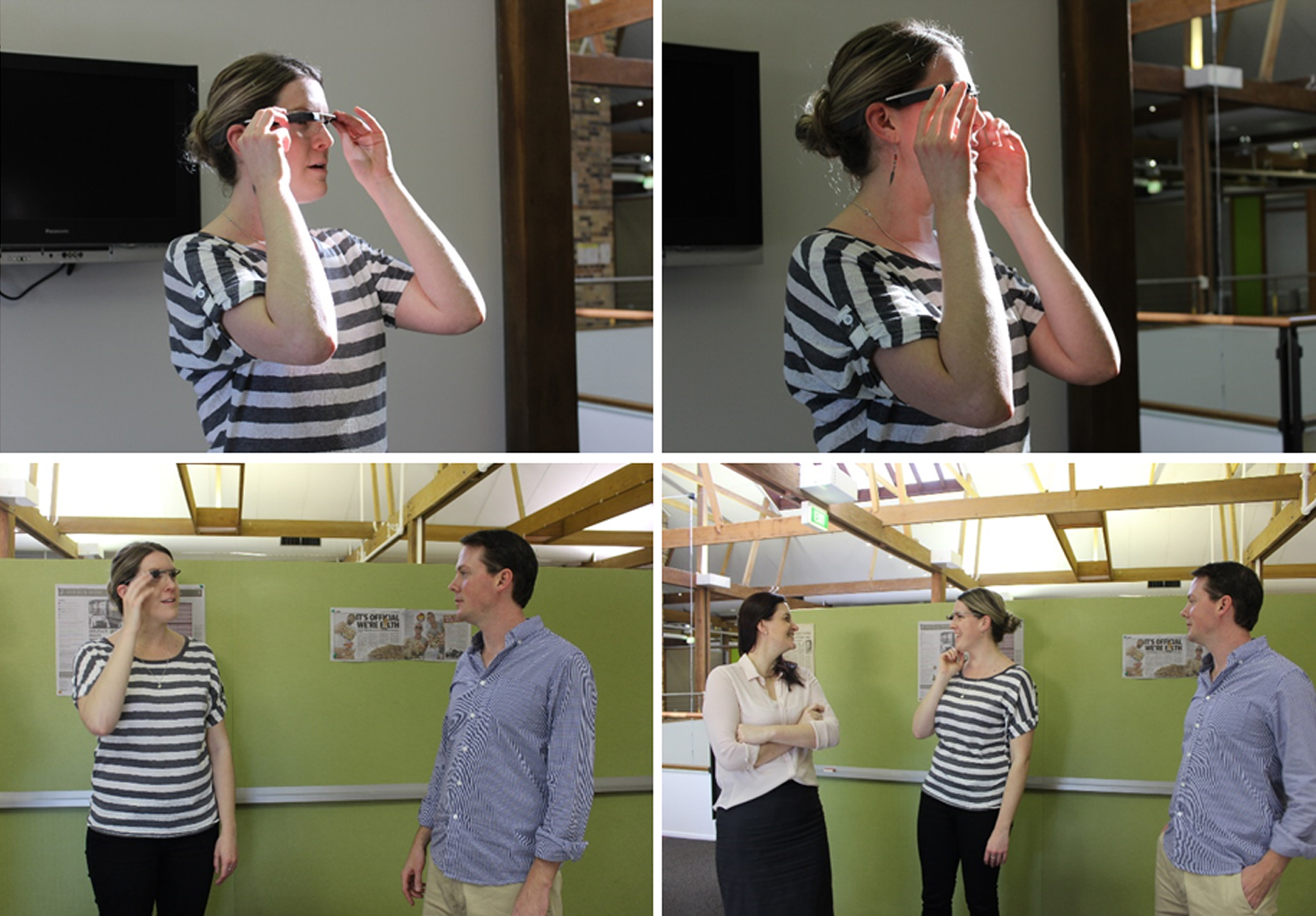 The user experience and user interface design is built around Google Now, “Just the right information just at the right time”. Google describe this interface as  “… a row of cards which wrap around your head…” with each ‘card’ containing history of your recent searches, phone calls, video calls, photos and videos you’ve taken on the device.

Navigating around this array of screens and information can be done via either voice commands or via the touch panel on the right. Both methods work seamlessly, although I did expect there to be more voice commands available so that ultimately you don’t need to keep tapping or swiping the side of your head. Hopefully there will be updates in the future that will improve on this functionality.

The sound delivery is exceptionally impressive on the device, as it doesn’t rely on conventional speakers but rather a ‘bone conduction transducer’ that rests on the user’s skull behind the ear and conducts sound to the inner ear. To the user this sound is clear as day, but to passers by, it is nearly completely inaudible. “Ping”, I just received an email, but now I can swipe to the unread email, tap to select the controls to the email and select “Read email aloud”. Now I can keep doing other things whilst having my emails read to me.

After this initial play with Glass, I have noticed a couple of drawbacks. After about an hours use my eyes are feeling strained from changing focus so often and from focusing on a screen so close. Also the side of my head is starting to warm up as the Glass starts to heat up. The final issue, and possibly one of the most frustrating, is the battery life. You can literally see the percentage bar just ticking away.

Whilst I can see some real potential to Google Glass after trying it out, I feel some serious use is needed to make a better judgement call. I also can’t help but feel that as an early adopter, I am a beta tester for something that could become something bigger. How this device will be perceived in the wild is the real elephant in the room. Could it be that everyday people will find Glass a social turn-off or even creepy? Let’s find out.