Aussie actress Margot Robbie has appeared on the front cover of Vanity Fair to promote the two blockbuster films she’s starring in this year- The Legend of Tarzan and Suicide Squad; Unfortunately all Vanity Fair contributor Rich Cohen could talk about was Robbie’s appearance and her sex scenes.

The first paragraph of the article describes Robbie as: “She is 26 and beautiful, not in that otherworldly, catwalk way but in a minor knock-around key, a blue mood, a slow dance. She is blonde but dark at the roots. She is tall but only with the help of certain shoes. She can be sexy and composed even while naked but only in character.”

It just gets better:

“She wandered through the room like a second-semester freshman, finally at ease with the system. She stopped at tables along the way to talk to friends. I don’t remember what she was wearing, but it was simple, her hair combed around those painfully blue eyes. We sat in the corner. She looked at me and smiled.” 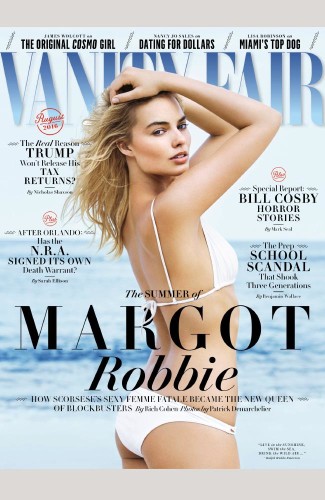 This is also the way Cohen describes Australia:

“Australia is America 50 years ago, sunny and slow, a throwback, which is why you go there for throwback people. They still live and die with the plot turns of soap operas in Melbourne and Perth, still dwell in a single mass market in Adelaide and Sydney.”

If you want to read the rest of 3,890 word description of Robbie, click here.

The article has been lampooned on Twitter for being creepy and sexist.

The quietly awful thing that the Vanity Fair piece did is steer the conversation away from Margot Robbie’s talent, which is what matters.

@VanityFair @MargotRobbie You wrote one of the worst articles about a very talented lady. ? #smh

only tweeting bc this is a master class in how NOT to do a profile. overwritten, poorly-structured sexist drivel. https://t.co/2FvK8wI3gp

i don’t get this Margot Robbie profile at all. pic.twitter.com/gDc886RxVz

the Margot Robbie profile is actually very good if you just pretend it is about my parents’ dog, Robbie pic.twitter.com/UBWELBrhnI

thanks @VanityFair for letting America’s Greasiest Creepy Uncle profile Margot Robbie. it was illuminating if not for the reason you planned

“hey have you read that Vanity Fair profile of Margot Robbie everyone’s mad about?”

Every issue of Vanity Fair this month comes with a thin sheen of Rich Cohen’s semen holding the pagies of Margot Robbie’s profile together.

tip for journalists writing abt women: if you swap subject's name w/ your dog's name & it reads like you wanna fuck your dog, maybe rephrase