An outdoor guerrilla ad campaign encouraging homosexual men to have unprotected sex has been decried by health professionals for its dangerous health message.

The campaign has popped up around Melbourne and suggests gay men no longer need to use condoms during sex if they use a non-approved pill called PrEP – that also goes by the name of Truvada – that the makers say can protect gay men from HIV infection. 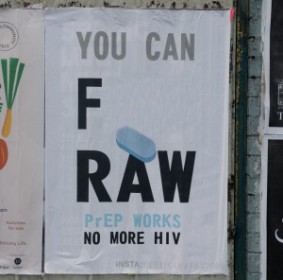 The street campaign features the text: “YOU CAN F*** RAW. PrEP WORKS. NO MORE HIV.”

Although Truveda has been proven at blocking HIV infection if taken daily it is not approved for use in Australia nor is it to be used for the purpose the advertisement claims. The drug is currently before the Therapeutic Goods Administration, but if approved is unlikely to be available through the Pharmaceutical Benefits Scheme for at least another 12 months.

Although not yet approved for sale in Australia, it has been reported that Truvada is freely available from India via the internet

Health professionals have argued that there are no guarantees with the drug and it will undo 30 years of positive HIV messaging in the gay community. Also, it does not protect against other STIs that are easily transmitted during unprotected sex.

However, health officials in the LGBT community have argued that PrEP is better than nothing at all in the often condom-adverse gay community.

The advertising of the drug has been paid for and supported by gay activist group SEEITCLEARLY2020 who argue the benefits of PrEP are being ignored. “The reality is that HIV will continue to be transmitted by raw sex if we do not make PrEP fully accessible to Australians,” it said in a statement.

The company that makes Truvada – Gilead Sciences – has been reported in the Fairfax Media as saying it has nothing to do with nor supports the outdoor poster campaign.

“Gilead supports Truvada for PrEP as an important HIV prevention tool if used as part of a comprehensive HIV prevention strategy among certain high-risk populations. However, until it is approved by the TGA, Gilead does not support its off-label use in Australia,” a spokeswoman was quoted as saying in Melbourne’s The Age.