How do you attract tourists when, let’s be honest, your home state’s just a bit boring?

That was the dilemma facing US midwestern state of Nebraska which, due to a lack of things to do, was facing a visitor shortage on top of being voted the “least likely state” tourists planned on visiting.

Hence, its new tourist catchphrase, “Honestly, it’s not for everyone” which aims to lure tourists from noisy cities to enjoy Nebraska’s peace and quiet.

The new campaign’s the work of creative agency Vladimir Jones and even includes the line “Lucky for you, there’s nothing to do here” in one of the print campaigns. 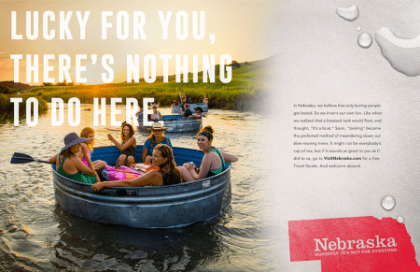 Another features hikers at Toadstool Geologic Park and the tag, “Famous for our flat, boring landscape.” 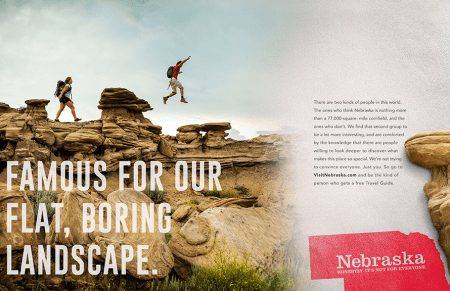 While a billboard campaign debunks the myth that Nebraska is all arid farmland with the kicker, “Another day on the dusty plains.”

Nebraska’s state tourism director John Ricks said that due to Nebraska’s reputation for being dull the marketing campaign needed to be different.

“To make people listen, you have to hook them somehow,” Ricks said. “We had to shake people up.”

And what about this idea that Nebraska offers few attractions to tourists? “I call bunk on that,” said Ricks. “There’s a lot of cool, fun stuff to do here.”