Revenue generated from advertisements in the Asia Pacific increased by 4.5 percent in 2016 compared to a year ago, reaching to $US139 billion. The revenue is expected to expand to $US182 billion in 2021, according to analytics firm IHS Markit.

According to the research, ad revenues grew in Australia by 4.3 per cent in 2016.

Analysis shows traditional TV media had dominated the Asia Pacific ad market in 2016, accounting for 39.0 percent of the total ad revenue. Still, TV commercials are expected to grow steadily with a compound annual growth rate (CAGR) of 2.2 percent between 2016 and 2021 for the ten aforementioned Asia Pacific countries studied. However, IHS Markit expects its share to decline to 34.0 percent by 2021 as stronger online media takes up a larger slice of the pie.

According to the research, Seven West Media was the eighth biggest revenue earner of all the media companies in the APAC region for 2016. 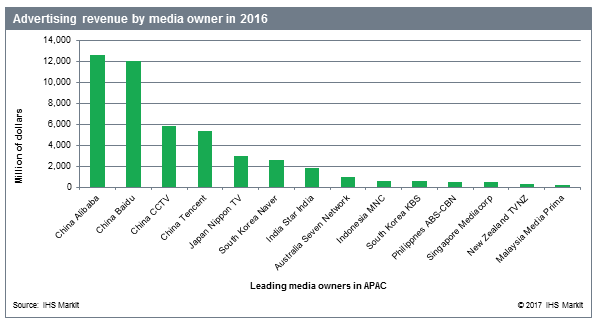 Commenting on the study, Qingzhen Chen, senior analyst at IHS Markit, said: “The Asia Pacific ad market last year, bolstered by robust performance of traditional TV media and rapid online growth, saw stronger growth that was underpinned by structural drivers, such as rising consumerism, the emerging middle class, as well as rapid mobile device adoption by a younger demographic in the developing markets,” he said.

“These factors will continue to propel the growth of advertising in the longer term. In contrast, growth for mature ad markets like Australia and Japan continues to be predominantly driven by innovation, better audience measurement, and digital adoption of traditional media via ‘out-of-home’ access.”

The latest IHS Markit analysis shows traditional TV media had dominated the Asia Pacific ad market in 2016, accounting for 39 per cent of the total ad revenue. Still, TV commercials are expected to grow steadily with a compound annual growth rate (CAGR) of 2.2 per cent between 2016 and 2021 for the 10 aforementioned Asia Pacific countries studied. However, IHS Markit expects its share to decline to 34 per cent by 2021 as stronger online media takes up a larger slice of the pie.

“While traditional TV media still remains an important revenue generator in Asia Pacific, print ads are expected to see imminent change over the next few years. Print ad has been growing in India, for instance, and it remained the dominant advertising medium in Singapore in 2016. However, we expect publishers to further trim their newspaper business moving forward, which has already taken place in Australia, New Zealand and Malaysia,” said Kia Ling Teoh, analyst at IHS Markit.

By country, China continues to lead online ad market in the region, taking 63.1 percent of the total online ad revenue of the ten Asia Pacific ad markets collectively by 2021. China’s 650 million online users — twice the size of the US population — only accounts for half of China’s population, making it one of the region’s most attractive ad markets. “Domestic online companies continue to invest aggressively into digital advertising, and foreign publishers show no sign of retreat from trying to enter the market, notwithstanding tightening content and ad regulations,” Chen said.