In news that probably won’t come as a shock to most people, a new study has found that smoking marijuana can markedly enhance a person’s TV viewing experience and their propensity to engage with the ads.

The study (which you can read in full here) was conducted by US media and brand consultancy Miner and Co. Studio and discovered that smoking cannabis can significantly improve parents’ family TV time with their kids!

But far from the image of unemployed stoner hippies, the study found that most cannabis users were employed, affluent and educated with household incomes above $US75,000 ($A100,000).

Somewhat unsurprisingly, the study also found that cannabis smokers watch A LOT of TV and 75 per cent admitted they watched more TV when stoned.

It also found that stoned TV viewers were 60 per cent more likely to purchase products that were advertised during TV breaks. While 77 per cent said they were more likely to sit and watch an ad until the end after a toot of the ganga. 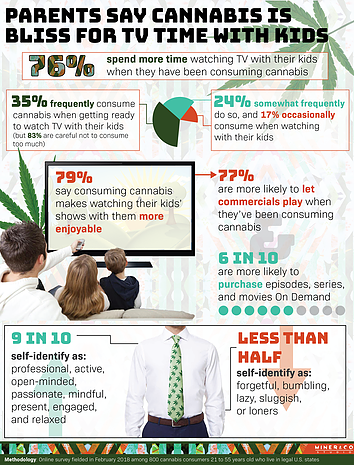 The study polled parents of children under the age of 18 who regularly consumed pot in US states were it was legal to do so. With most admitting they were most likely to consume edible marijuana than smoke it in front of their children.

Nearly eight out of 10 cannabis-using parents said they regularly smoke cannabis prior to watching TV with their kids, with the majority agreeing it made TV shows more enjoyable which, in turn, lead to more time watching the shows and discussions with their children.

Some 86 per cent admitted cannabis enhances the overall experience of the shows they’re watching. Seventy-seven per cent noted that cannabis improves their attention span so they’re more likely to binge-watch, try out new shows and series (77 per cent), feel more immersed in the show that they’re watching (86 per cent) and they say that they’re more likely to let commercials play (77 per cent) when they’ve been consuming cannabis.

Commenting on the study, Robert Miner, president of Miner & Co. Studio, said: “The stoner stereotype is so prevalent and persistent in TV and Media that it continues to stigmatise those for whom cannabis is part of their active and healthful lifestyle.

“This is especially true for Cannabis Consuming Parents who feel that cannabis plays a positive role in their lives and in some ways, improves their parenting and time spent with their families – including watching TV,” he said.