Advertise with us
Posted 2 November, 2016


Consumption of packaged fruit juice in Australia has been in freefall in recent years, with the latest findings from Roy Morgan Research showing that the number of Aussies who drink it in an average week has plummeted by 1.3 million people since 2012.

Roy Morgan found that 6.6 million Australians aged 14 or older (35.2 per cent of the population) reported drinking packaged fruit juice in any given seven days back in June 2012, consuming an average of 4.6 glasses each.

Fast forward to June 2016, and that figure had fallen to 5.3 million people (26.9 per cent) drinking an average 4.3 glasses each – fewer people drinking fewer glasses.

The study found that all of the supermarket-branded juices combined were more widely consumed than any of the big names, with 6.2 per cent of the Aussie population drinking them each week. 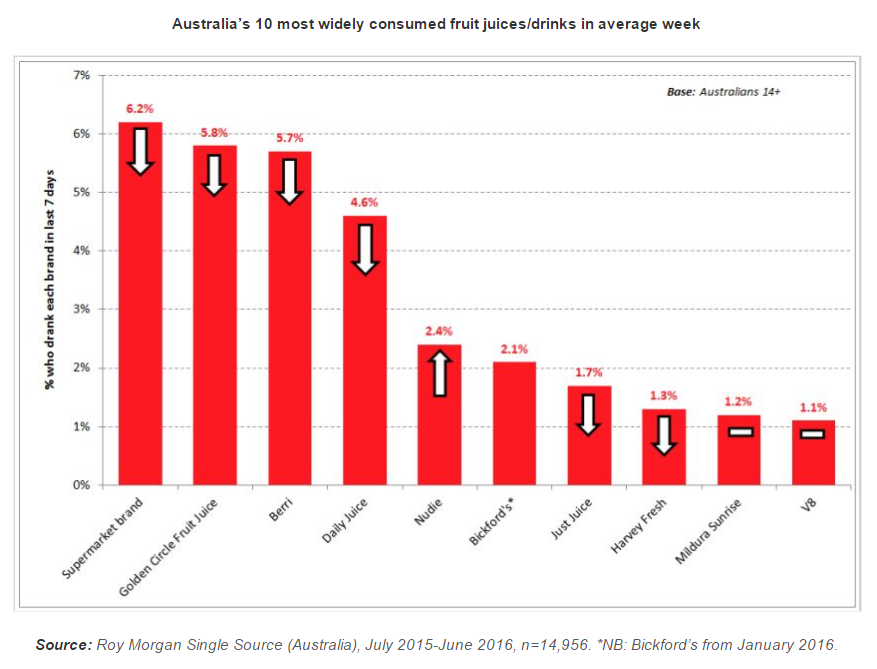 However, Nudie was the only juice brand to have gained popularity since 2012, with its weekly consumption almost tripling from 0.9 per cent to 2.4 per cent of the population.

Roy Morgan Research’s industry communications director, Norman Morris, said Nudie has always set itself apart from the other major brands by emphasising its healthy qualities and lack of additives and preservatives.

“In fact, Golden Circle, Daily Juice and Berri are all more popular with Aussies under 25 years than home brand fruit juice,” he said.