In the last 12 months, the proportion of Australians planning to take a holiday has increased to 70 per cent the latest findings from the Roy Morgan Holiday Tracking Survey as revealed.

This recent increase appears to have been driven primarily by an uptick in domestic holiday intention and steady overseas travel.

In contrast, overseas holiday intention is the same as it was a year ago (11per cent), remaining relatively stable over the last 12 months (up 60,000 people).

Australians intending to take a holiday in the next 12 months 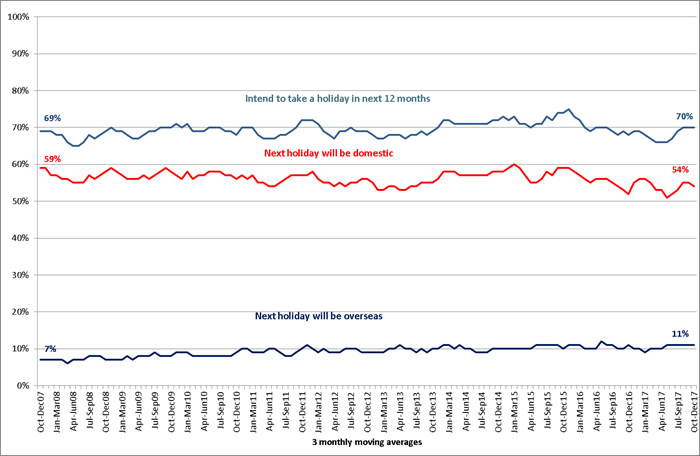 Obviously, holiday intention can vary between different segments of the population, with factors such as current life circumstances and even whether they’re based in an urban or rural area having a bearing.

For example, holiday intention is markedly higher among parents of kids aged under 16 (74 per cent) than among Aussies in childless households (61 per cent), with this difference applying to both domestic (61 per cent vs 45 per cent) and overseas (10 per cent vs 12 per cent ) holidays. ‘Empty nesters’ are above average for overall intention (77 per cent) due to the elevated proportion of them planning a domestic holiday (61 per cent), while older folks (aged 65+) are less likely to have any kind of getaway on the horizon.

Furthermore, while 70 per cent of Australians living in capital cities and 65 per cent of those based in regional areas are planning a holiday, it’s interesting to see that the former are more likely to have an overseas trip on the horizon (12 per cent) than the latter (seven per cent), while the reverse is quite even for domestic holiday plans (54.1 per cent of country Australians vs 53.8 per cent of city-dwellers).