It’s arguably one of Channel Seven’s showpiece events of the year and if a new study is to be believed the network’s investment in the Australian Tennis Open is well worth the coin.

Seven reportedly pays about $30 million a year for the two-week event which starts next Monday and uses the coverage to extensively spruik its upcoming shows when rating season begins again in February.

According to Roy Morgan Research some 32.4 per cent of the population (6.4 million people) claim they “almost always or occasionally” watch the Aussie Open on free to air TV.

The Australian Open is particularly popular among people aged 50 or older, surpassing the national average with the 50-64 year-old bracket (36.3 per cent of whom tune in to watch it) and tracking upwards to peak among the 65-plus demographic at 46.3 per cent. 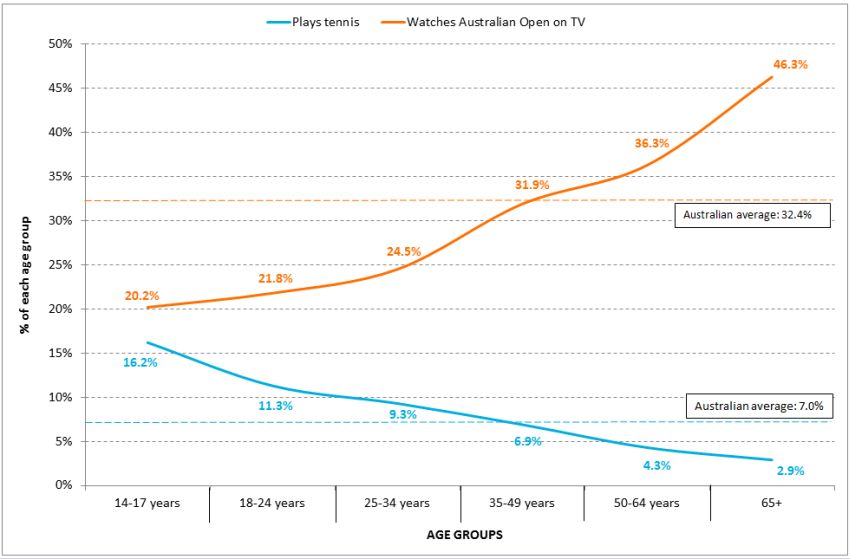 But all is not lost for the great game. Sure, younger people aren’t watching the Open on TV but according to Roy Morgan they are playing it. Tennis participation is at its greatest among teenagers aged 14-17 years (16.2 per cent), but starts slipping from 18 years onwards.

While seven per cent of Australians overall play tennis, this slips to 4.3 per cent of 50-64 year-olds and heads steadily south from there to 2.9 per cent of the 65-plus group – the same two age groups most likely to be glued to the TV during the Australian Open next week.