Not that you need to be told – it’s office Christmas party season! Which probably means one of two things: you’ve just done something embarrassing, drunken and career destroying, or you’re about to.

However, a new study out of the UK offers some good news for anyone who’s drunkenly pashed a work colleague at the annual Chrissie bash.

The study, by Instaprint (that you can in full here), found that half of respondents surveyed admitted to having “hooked up” with a colleague at their Christmas party and, more interestingly, 53 per cent who did were still in the relationship 12 months later!

Of the 2000 respondents to the study, some 72 per cent admitted they’d been drunk at their work office Christmas party, while a further 16 per cent admitted to have being “embarrassingly drunk”. Just five per cent confessed they’d stuck solely to the mineral waters.

The Instaprint study also confirms previous research that showed people employed in the HR or IT departments were most likely to misbehave.

A 2015 study by UK lingerie retailer Ann Summers found that 63 per cent of people employed in HR or IT had snogged a colleague at the work Christmas party and a staggering 56 per cent confessed to having had sexual intercourse with a colleague. 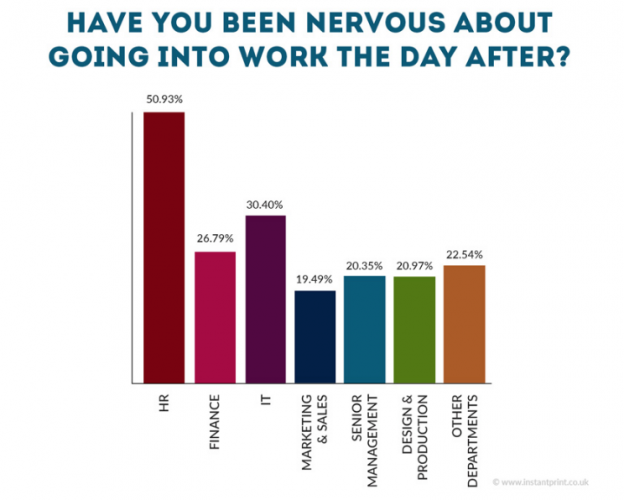 Meanwhile, the Instaprint study has also confirmed that people from the HR department are the worst behaved Christmas party attendees. According to the study, some 51 per cent of HR professionals admitted they’d been nervous about going into work the day after their end-of-year festive bash.

Almost 31 per cent of IT workers confessed they’d slinked into the office the following day, as had 27 per cent of people from the finance department.

Interestingly, office workers largely considered their own department to be the rowdiest or causing the most trouble at the work Christmas party. 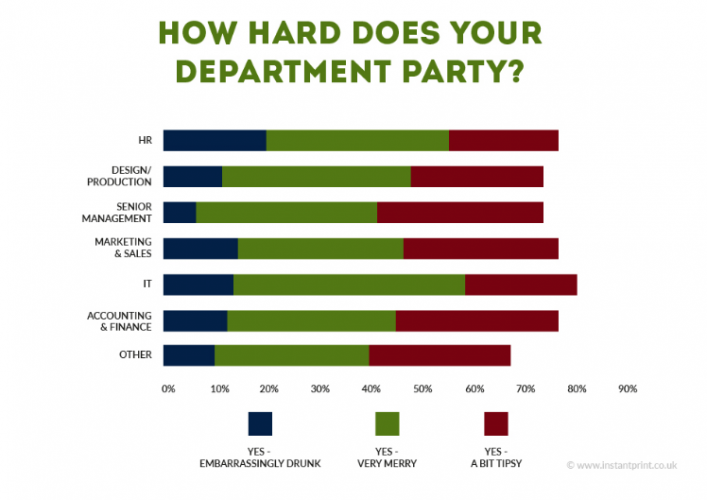 Despite HR being the wildest, respondents voted the sales and marketing team as the department most likely to cause trouble at the work Christmas party.