More than half (52.2 per cent) of Australian drivers would now seriously consider buying a hybrid vehicle, up from 48.8 per cent over the last year, according to new research from Roy Morgan.

Fully electric vehicles are also showing increased interest, up from 31.6 per cent 12 months ago to 36.2 per cent currently. This has now resulted in the overall consideration for electric based vehicles (hybrid or fully electric) being 56.1 per cent, an increase from 52.4 per cent last year and well ahead of the nearest alternative, diesel on 45.5 per cent.

Consideration for diesel and LPG in decline

Diesel and LPG have been seen as the main alternatives to petrol up to 2015 but are both now showing a declining trend over the last three years. Although diesel with 45.5 per cent consideration currently remains above fully electric (36.2 per cent), over the last two years it has been overtaken by hybrids which are now clearly the major alternative to petrol, being seriously considered by over half of all drivers.

With the combination of hybrid and fully electric vehicles being seriously considered by 56.1 per cent of drivers, these electric based alternatives are likely to pose an increasing threat to petrol vehicles over the next decade. 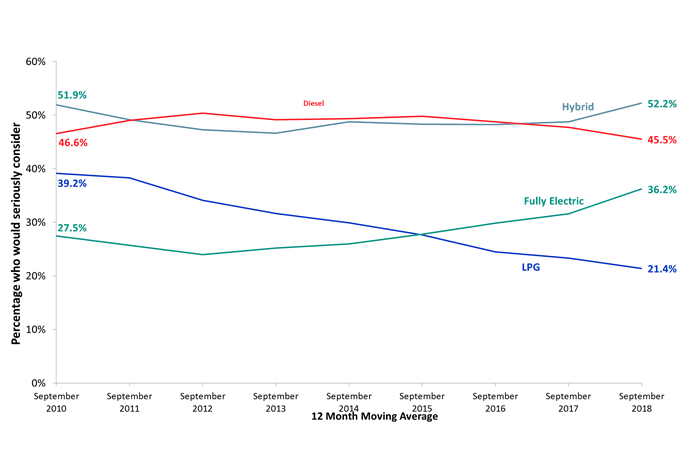 Currently an estimated 77.5 per cent of vehicles run on petrol but this is likely to decline due to the fact that only 63.7 per cent of drivers say that their next vehicle is most likely have a petrol engine. This is not surprising as we have seen a high level of consideration for alternatives to petrol which will ultimately translate to increased buying intentions.

Although diesel is facing declining consideration, the fact that it is still being considered by 45.5 per cent of drivers accounts for the fact that a relatively high 24.8 per cent still consider it to be the most likely fuel for their next car. 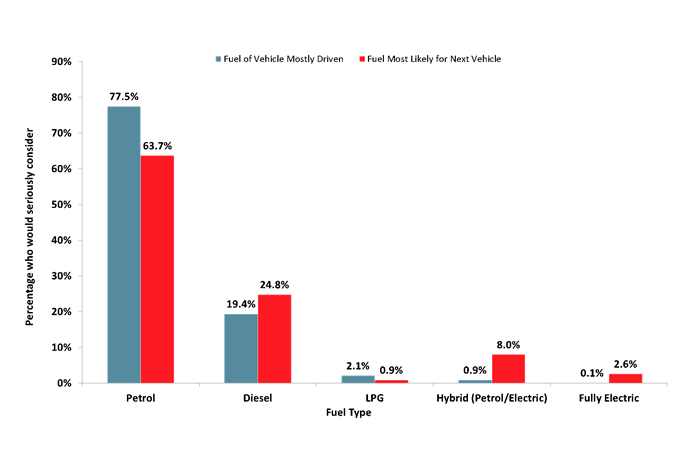 “This is largely as a result of major car brands continuing to develop and produce new models that make alternate fuels an affordable and practical reality. A recent example of this is that Volkswagen has just announced that it will launch its last generation of vehicles using combustion engines in 2026 and focus on electric cars instead.

“Vehicle purchase intentions can be influenced by fuel considerations, however to date, this has been a long term indicator in converting this to actual sales. This is illustrated by the fact that despite high consideration levels among Australians for both hybrid and fully electric vehicles over the last eight years, they still account for around only one per cent of total vehicles. The challenge is to convert fuel consideration into vehicle sales. There are some positive signs in this research that this will occur, as evidenced by the fact that there has been a very positive level of drivers saying that their next car is most likely to be a hybrid or fully electric,” Morris said.