With a brand hitching itself to some good cause or another almost mandatory marketing these days, a new study has found that Australians are starting to face a bit of environmental fatigue. With Gen Zs particularly disinterested.

The study by research firm Roy Morgan found an apparent backlash against the green movement. The study was done in conjunction with National Recycling Week and, on that note, as a nation we to still be enthusiastic about sifting our garbage into the correct piles. The study found that 91.1 per cent of Australians (some 18 million) agreed with the statement, “I try to recycle everything I can”.

However, when it came to environmental issues, the study found that 63.2 per cent of Australians agreed “at heart I’m an environmentalist”. Although that figure was down from 68.8 per cent in 2001, while less than half of 14-17 year olds now consider themselves environmentalists.

Worryingly, some 30.5 per cent of male respondents and 21.9 per cent of females agreed that threats to the environment were exaggerated. That was up two and five per cent respectively from 2001.

When it came to shopping green or buying products deemed good for the planet, 67.2 per cent of women and 70 per cent of men agreed that “environmentally products are overpriced”.

Check out the full findings below: 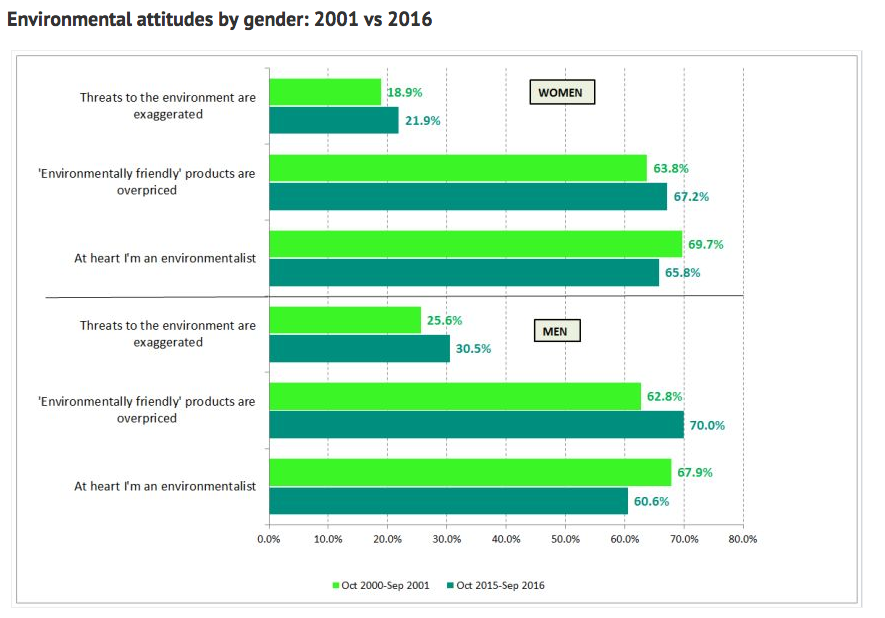 Commenting on the study, Roy Morgan’s CEO Michele Levine said: “The fact that more than nine in 10 Australians try to recycle everything they can is excellent news from an environmental perspective.

“But despite Australians’ widespread adoption of a green approach to rubbish disposal, Roy Morgan data shows that this is not translating into increased environmental concern. The proportion of us who say we’re environmentalists at heart has declined since 2001, with the most striking drop (from 73.2% to 61.6%) occurring among 35-49 year-olds. What’s more, less than half of 14-17 year-olds now consider themselves environmentalists.

“Add to this the increasing number of Aussies who feel that threats to the environment are exaggerated and that environmentally friendly products are over-priced, and a curious cognitive dissonance sets in!

“These results suggest that environmental organisations may need to ramp up their efforts to understand the values and attitudes underpinning Australians’ views on these related but different issues. By delving into deep data contained in Roy Morgan’s Single Source, organisations can pin-point which segments of the population are more and less likely to care about which environmental issues: from their demographics, values, sources of information and attitudes ,to the advertising channels they pay most attention to. This would then allow for much more tailored communications strategies and campaigns, designed for maximum impact.”