Asia’s very own version of Cannes – Spikes Asia – is on right now in Singapore. And, luckily for us, Aussie duo from MEC Global, Ben Doecke (left in photo below) and Simon Keith, are not only representing Australia in the media category they’re also blogging for B&T. Here’s their first instalment from Asia’s balmy climes…

We’re half way there. We’ve submitted our idea for the Young Spikes Media Competition, and now have 24 hours to work out the best way to sell it to the judges. 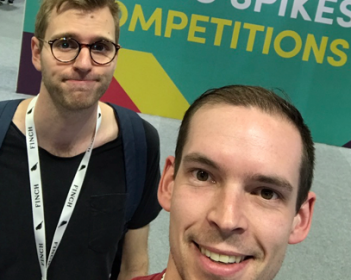 However it wasn’t easy getting to this point thanks to something neither of us have experienced like this before: Creative Block.

A good place to start is to mention that after we submitted our idea, we Googled “writer’s  block” and instantly related to the first page we found discussing the five stages; denial, anger, bargaining, despair and acceptance.

During the National Young Lions finals, everything went according to plan. Our idea came early, we were ahead of schedule, and even had a decent night’s sleep. What was stopping us from doing that again?

The first few hours were cruisy. We read and deconstructed the brief, researched as much as we could and even had a nice Yum Cha lunch.

There’s about 50 post-it notes stuck on the wall. All going to plan.

Then we hit the five-hour mark and realised we hadn’t made any real progress. Another hour passes, then a couple more. We’ve been going around in circles thinking of different insights and ideas, but nothing that really hits the brief.

So what else is there to do but blame the brief. They expect so much, with no budget, and too many restrictions.

Of course we both knew this was getting us nowhere and the brief wasn’t really the issue. It was designed to challenge us. But when Creative Block sets in, blaming something else just comes naturally.

We kept saying ‘the earlier we get to bed the earlier we can start again in the morning?’. Pens and post-it notes sat eagerly on the bedside tables. Surely we’d wake up with the brilliant idea we’ve been searching for.

At this stage we questioned our place in the competition. What are we doing here? Did we just fluke our way through the national finals?

Some of the best talent in APAC is here in Singapore, and they’re probably already knocking back beers by the pool.

Despair manifested itself in silent pacing, only broken by loud cursing and rambling phrases in the hope an idea would be triggered in the other person.

We felt like giving up, but it was the fear of humiliating ourselves rather than the desire to win that kept us going.

Finally reality kicks in. We’ve got three hours until submission and a non-winning idea is better than no idea at all. We better just chose from the post-it notes on the wall and run with it.

We cobbled together a number of ideas from the past 24 hours. Maybe it was because we finally made a decision, but it did feel like the idea clicked at the last moment. Not a big ‘aha’ moment, but it felt like we’d done enough that we could still show our faces in the office.

And after we submitted, we remembered something a former colleague told us: We’re not brain surgeons. The world will keep spinning, birds will keep chirping, and life will go on.

Now time for a beer and to soak up the Spikes Asia atmosphere (Oh and getting ready to sell our idea in 24 hours).