A Scottish TV reporter has delivered the perfect put-down to Twitter trolls who struggled with his accent and told him to “speak proper accented English”.

BBC reporter Martin Patience heralds from Glasgow and is currently reporting from a place even more dangerous – the Middle East.

When the troll – who went by the alias ‘Old Black Beard’ – tweeted: “Can anyone understand what this reporter is saying as I am struggling? He needs to speak better accented English I think, more middle class if you know what I mean.” Patience returned fire with the perfect comeback: “Look pal, in Glasgow I’m considered posh.” 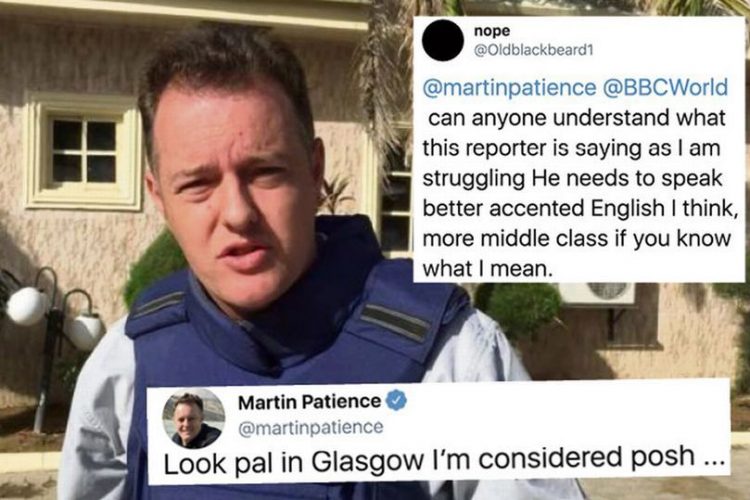 Soon, Old Black Beard found some supporters. Another anonymous person tweeting: “It used to be Queen’s English, BBC English and the dialects.”

Again, Patience was having none of it, reminding his detractors that the BBC was actually created by John Reith in 1922 who, ironically, was a Glaswegian.

Patience tweeting: “Last time I checked the BBC was created by a man … drumroll please … from Glasgow!”

Thankfully, for the Scottish TV reporter, he appeared to have more fans that he did enemies judging by the social media reaction.

“Martin Patience is a very clear speaker. I am from Scotland and was trying to find out where his accent came from,” tweeted another fan.

“Better accented English? That could only be achieved if he had been born in Dundee.”

“At least you’ve kept your accent unlike a lot of Scottish commentators. #BeProud,” said another.