That’s according to new research on the role of social media in politics, commissioned by The Australian Institute.

The study, conducted by Essential Media, asked over 1000 Australians whether they would support or oppose a range of different regulatory options around regulating political advertising on social media.

“Despite its increasing dominance as a campaign method, political advertising on social media platforms is not subject to the same legislative restrictions as traditional advertising material,” said the institute.

“As the 2019 Federal election highlighted, spreading misinformation through social media has become a political strategy.

“Misinformation competed against traditional campaigning, and sometimes dominated the political narrative on that issue.”

The most popular regulatory change was around fact-checking claims made in political ads, while seven out of ten respondents said ads should declare whether the organisation behind the campaign is registered locally. 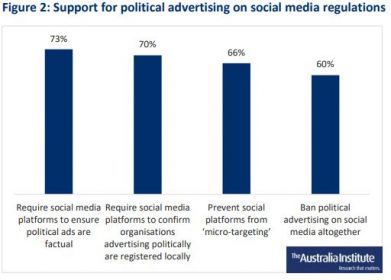 Additionally, the research revealed Australians are concerned with how social media companies use micro-targeting in political advertising.

“There are growing privacy concerns as to what data is mined by social media companies, who they sell this data too, and how the data is then used,” the group said.

“Social media users need greater say on what happens to their personal information, and greater transparency from social media platforms.”

There was also some concern around ‘dark’ ads, which can be coupled with micro-targeting to deliver a very specific message to a specific person.

This also brings with it problems around tracking.

“Dark ads can be a damaging tool encouraging division and polarisation, happening without public accountability or scrutiny,” the report said.