Following on from reports on B&T today that 27 per cent of respondents to a survey wanted Santa Clause to be a woman or gender neutral comes news out of New Zealand of a hybrid man-woman Santa in fishnets.

The rather odd looking Father Christmas – known as “Santa Poppins” – has appeared atop Auckland’s Ponsonby Centre. 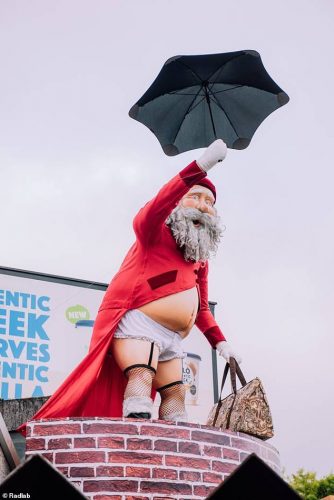 The rather scantily clad Santa Poppins is apparently supposed to be gender fluid and challenge our traditional perceptions of Old Nic.

One of Santa Poppins’ creators telling The New Zealand Herald: “Our representation of Santa can be Mary Poppins or whatever race/gender/persuasion we prefer and can imagine.

“The Coca-Cola company doesn’t have a monopoly on what he/she looks like,” the spokesperson said.

However, not everyone is as enthusiastic about a transgender Santa and the debate has even gone to the highest echelons of New Zealand politics.

The leader of the opposition, Simon Bridges, said: “Mary Poppins is a woman, Santa Claus is a man. That’s how it should be.” Bridges later told a local radio station: “I just want a few things I can believe in.”

And social media users appear to agree with Bridges’ sentiment.

“How is this on trend? Kids love Santa, it’s not all about you, believe it or not. Can you not leave just one this alone from your political BS?” wrote one.

Another added: “FFS remove this abomination. Christmas and Santa are for children. This stupidity has got to stop. Catering for a confused minority is a joke. What next? Santa holding a rubber fist? Get lost you pack of losers.”

While another tweet read: “Yeah, very f@cking funny. If the intention is to stop people like me with young kids going to the Ponsonby then job done.”