Judges of the Inaugural Shake the Cage Cup have awarded $15,000 in prize money to three lucky entrants – all of who used participating artist music or in the case of the first place, their own music.

See the full rundown on the winning three entries here:

Here's my entry for the @shakethecagecup promoting the funding of education for young refugees. Shout out to Phantoms Vs Fire for the sweet track. #shakethecup pic.twitter.com/t6s8b8G2Kr

The participants were notified yesterday along with the artists whose music was used.

2014 Rolling Stone Avant Album of the year producer of the Year Ben Frost appeared thrilled that his music had be used to bring awareness to the plight of Koalas, sharing his love to tome 13K global followers along with the Australian Koala Foundation.

Competition founder Daniel Bluzer-Fry said: “It’s been a raging success for the first run at it.

“The engagement we’ve got from top tier partners, some of the best artists in the world along with the public has created a very strong foundation and platform for what comes next”.

He added: “The synergies for those involved have created a lot of value. Amongst other things,  artists have had exposure to new audiences along with our partners, the public have won prizes and enjoyed some fun times, and a handful of brands in the NFP sector have been engaged and given exposure for their good work.

“All I can say, is that next week, we’re going to be crunching a few numbers and have some more surprises in store.

“Everybody who has been a part of the journey will be rewarded, so I’d jump aboard and get a Shaker Pass before we wrap up”. 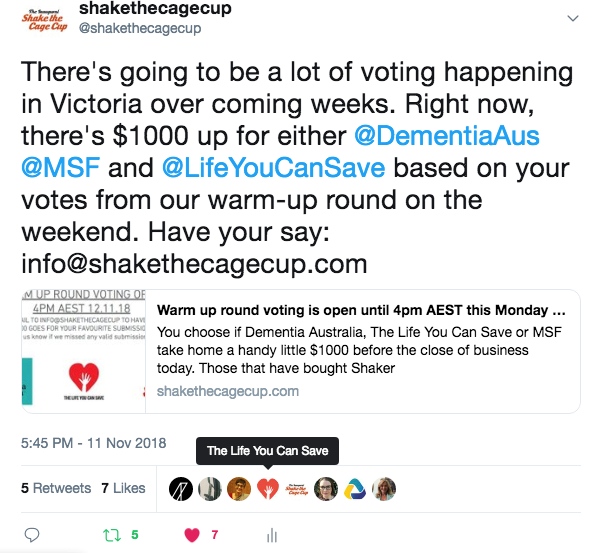 Last week, Bluzer-Fry – who has a background in insights and strategic planning – tilted his hat to W+K’s Head of Planning in Amsterdam when he referenced a quote from a passage titled “Make Dissent Safe” in one of the authors 2017 articles.

“It takes a lot of courage to be an early adopter and make a leap of faith jump on anything that hasn’t established proof of concept – and that certainly doesn’t go unnoticed on this end”.