It appears the two female Bachelor Vietnam contestants who went global when they ditched the bloke in the show for one another, making global headlines, are out of the house and back in each other’s arms.

As B&T reported in late September, two female contestants Minh Thu and Truc Nhu shocked just about everyone including the show’s Bachelor, Nguyen Quoc Trung, when they used the rose-giving ceremony to leave the competition – together! 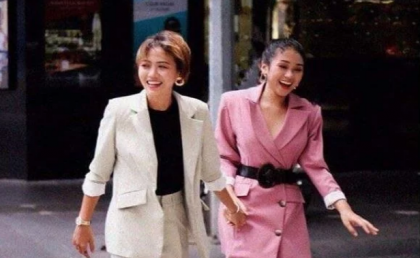 Despite leaving the rose giving ceremony hand-in-hand, Nhu quickly had second thoughts about her affections for Thu and re-entered the house to once again vie for Trung’s rose and affection. And “boo” we all said.

Sadly for Nhu, she didn’t manage to win Trung’s heart and got punted out of the house. B&T has no idea who the poor bloke picked in the end.

But now one of the show’s producers, Anh Tran has revealed that Thu and Nhu have rekindled their love post reality television.

“They left the show and have been together since. We delivered on our promise that two people would find love,” Tran told Nextshark.

Another producer on the show, Anh-Thu Nguyen, added that the couple’s love story was powerful “in the context of Vietnamese culture.”

“It’s been a proud experience to see our clip resonate around the world and become an unexpected platform for discussing LGBTQI+ issues in Vietnam on a global scale,” Nguyen said.

A friend of the duo, Lucy Jackson, posted on Facebook: “They (Nhu and Thu) just wanted to make sure their feelings weren’t just a misconception of love because they are so close,” adding that Nhu stayed on the show for a further two episodes before asking to leave as she had “already found what she was looking for.”