Australian brands in the retail, finance and travel sectors all experienced strong click through rates (CTR) on their search advertising in December and improving conversion rates in the final quarter of the year according to new data from Kenshoo.

Each month Kenshoo examines search advertising data from around the region to identify key trends in CTR, cost per click (CPC) and conversion rates. Over the twelve months January to December 2014, retail in particular delivered a strengthening CTR trend, ending the year at 4.89 per cent, only slightly below the November year highs of 5.58 per cent respectively.

Travel was steady throughout the year, peaking in Q1 with 2.34 per cent in February. Retail and finance meanwhile had much better second halves with CTR nearly doubling in some months between August and December compared to some of the months in the H1 results.

In December, conversation rates in finance reached an all-time high rate of 3.95 per cent. Across the year the finance category demonstrated dramatic improvements in CTRs, however, retail was the star performer on conversation rates with eight of the 12 months delivering over four per cent. 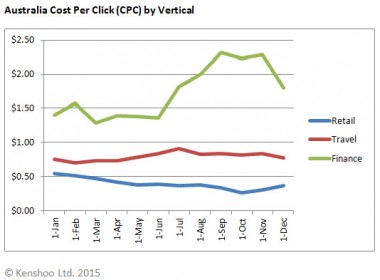 In  terms of CPC over the year. Travel was basically stable, retail declined throughout the year while finance CPC grew strongly in the second half and only softened right at the end of the year back to a level that was still 28 per cent higher than the start of the year.

Finance also delivered the most expensive month for clicks across the three categories with CPC rising to $2.32 in September before drifting back to $1.79 by year end.

This data is based on an analysis of more than 350 advertisers actively running paid search campaigns through Kenshoo in the Australia region.

This article originally appeared at www.which-50.com