Results released today from the Roy Morgan Australian Magazine Readership report for the 12 months to June 2017 show that 10 of Australia’s top 15 titles increased their print readership over the past year.

The good news for magazine publishers is that a total of 12,470,000 Australians aged 14-plus (62.6 per cent) read print magazines according to the latest data for the 12 months to June 2017 virtually unchanged from a year ago (down only 0.1 per cent). 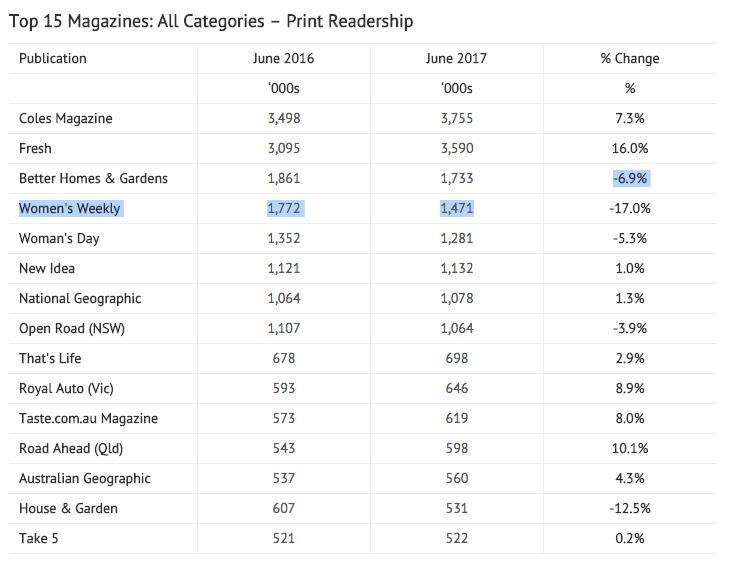 This category has undergone long-term growth, including a year on year category increase of 5.6 per cent largely on the back of these two free supermarket titles.

Readership of general interest magazines has been remarkably stable over the past year (up 0.5 per cent).

In contrast to the fortunes of the two top categories, the readership of mass women’s magazines has been under long-term pressure although 3,385,000 Australians continue to read with the category (down 6.5 per cent from a year ago) and equal to 17 per cent of the population.

The fourth most popular category of magazines remains Home and Gardens, despite a drop of 7.5 per cent in the last 12 months after a period of relative stability. Some 2,933,000 Australians now read at least one magazine in this category equal to 14.7 per cent of the population.

Readership in this category declined over the past year, down 2.9 per cent to 1,694,000 Australians.

Qantas magazine remains the lead title in the category despite a year on year decline of 9.7 per cent. New Scientist grew it’s readership to 377,000 (up 1.9 per cent) and Time magazine held steady with a readership of 339,000.

Of Australia’s leading 10 magazine ranked by cross-platform audiences nine of the 10 retain a significantly larger readership via their print editions than their digital offerings.

Earlier this year many of Bauer’s magazine brands consolidated their online presence under category banners such as Now to Love. The results in the cross platform table below reflect this new positioning and therefore year on year comparisons are not made. 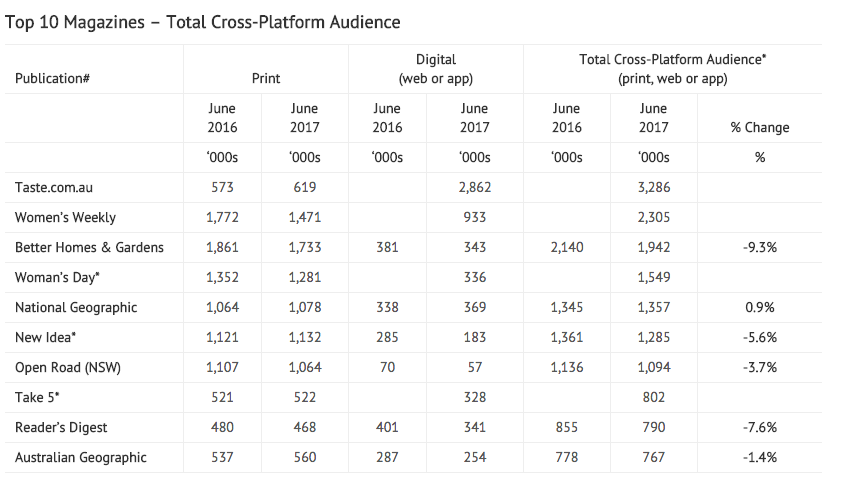 Commenting on the results, Roy Morgan CEO Michele Levine said: “Over the past year Roy Morgan has emphasised an increasing trend impacting many industries in Australia – the move to an ‘experience economy’ as consumers move away from traditional notions of ‘ownership’.

“This trend has been explored in the recent Roy Morgan State of the Nations on the Automotive and Retail industries and the upcomingState of the Nation on Media will closely analyse its impacts across the breadth of the industry.

“Our analysis of the latest trends shaping the magazine industry today reveals an industry in flux as these competitive pressures and changing consumer habits provide different challenges for different types of publications.

“As noted in today’s newspaper readership release newspaper inserted magazines (NIMs) have seen an increase in print readership over the past year and this increase is matched by 10 of 15 of Australia’s most widely read magazines – the pleasant experience of reading your favourite glossy still retains widespread appeal.”