Everywhere man, lady’s idol and occasional prime minister of Canada, Justin Trudeau, has been photographed for the latest cover of US Rolling Stone complete with the cover line “Why Can’t He Be Our President?”.

Less a genuine question, the line is clearly a dig at Donald Trump by the liberal-leaning music magazine. 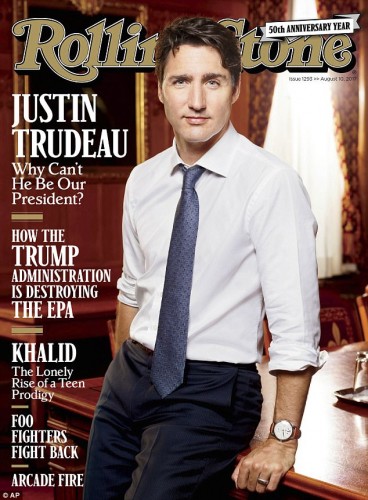 In the accompanying interview, Trudeau reveals he “disagrees with Trump on a whole bunch of issues” but adds the two leaders have a “constructive working relationship”.

Trudeau said: “I don’t feel that I or Canada has to prove anything through big, loud, overt acts.”

However, not everybody is happy with the magazine’s latest cover star, with many taking to social media to register their displeasure.

Even Trudeau’s supporters felt a prime minister being on the cover was inappropriate, “stupid” and “cringeworthy”. “I voted for him and I find this cover massively cringe-inducing.”

Another added: “God this Rolling Stone profile of Trudeau is stupid.”

While another tweeted: “Trudeau gave $10.5million to a guy who attacked/killed US soldiers” in reference to Canadian citizen Omar Khadr who was detained in Guantanamo for a decade but was recently compensated by the Canadian government.