If there’s a brand that’s running against the zeitgeist at the moment – and by that we mean badly in the wrong direction – it would have to be the once mighty Victoria’s Secret.

A reliance on stick-thin supermodels, garments not tailored to everyday women and recent controversial comments by its CMO have found the brand on the nose and ripe for picking by disruptive competitors.

And a rival has done just that with plus-sized brand Navabi launching a campaign directed at Victoria’s Secret’s “ridiculously outdated attitude”.

The Navabi ad starts with comments by Victoria’s Secret CMO Ed Razek, who told US Vogue last month he’d attempted to do a “television special” version featuring all plus-size models in 2000, but claimed “no one had any interest in it,” adding they “still don’t”.

“It’s like, why doesn’t your show do this? Shouldn’t you have transsexuals in the show? No. No, I don’t think we should. Well, why not? Because the show is a fantasy,” Razek told the publication.

The Navabi TVC stars five models, wearing underwear and angel wings, asking, “Hey Victoria, what’s your secret?” before dancing and saying “the secret is that you don’t care about most women”.

Check it out below:

Not that Navabi’s jibes are new. Just last month, another of Victoria’s Secret’s rivals – a company called ThirdLove– took out full-page newspaper ads to roast the brand after more Razek comments were he said: “We’re nobody’s ThirdLove, we’re their first love.”

ThirdLove’s co-CEO Heidi Zak wasn’t buying in to Razek’s jibes, penning an open letter to Victoria’s Secret expressing her disappointment, among other things, of how the racy brand portrays women’s body image. 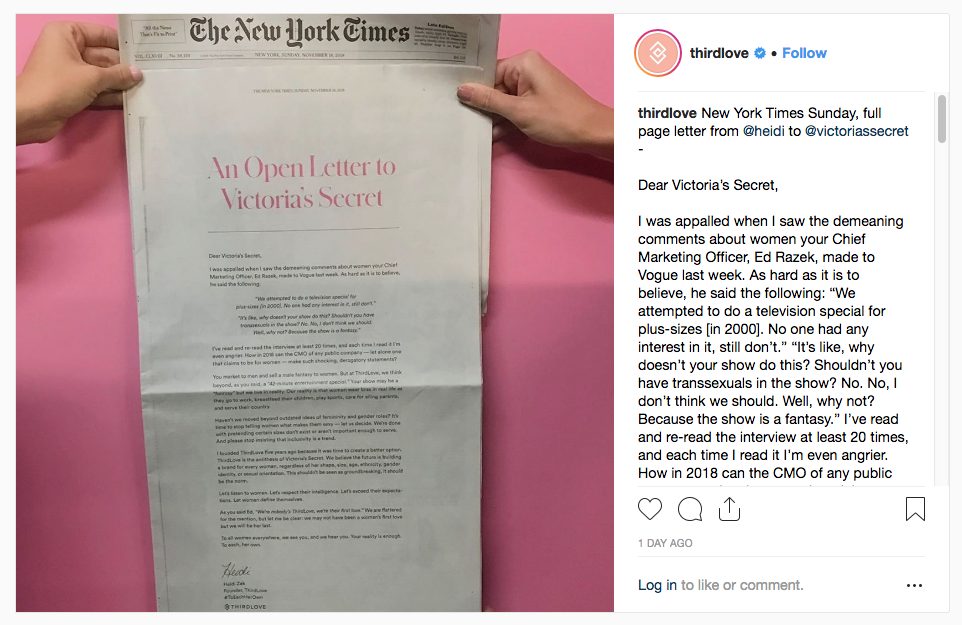 “I was appalled when I saw the demeaning comments about women your chief marketing officer, Ed Razek, made to Vogue last week,” Zak wrote at the start of her letter, which is now being shared across social media.

“How in 2018 can the CMO of any public company – let alone one that claims to be for women – make such shocking, derogatory statements?

“You market to men and sell a male fantasy to women,” Zak added. “But at ThirdLove, we think beyond, as you said, a ‘42-minute entertainment special’.

“Our reality is that women wear bras in real life as they go to work, breastfeed their children, play sports, care for ailing parents, and serve their country. Haven’t we moved beyond outdated ideas of femininity and gender roles?”

“It’s time to stop telling women what makes them sexy – let us decide.

“We believe the future is building a brand for every woman, regardless of her shape, size, age, ethnicity, gender identity, or sexual orientation. This shouldn’t be seen as groundbreaking, it should be the norm.

“To all women everywhere, we see you, and we hear you. Your reality is enough.”