Matthew Cooper’s week has gone for abysmal to utterly dire following reports this morning that he has been sacked from Southern Cross Austereo following his infamous streak at an NRL match on Sunday (which you can relive below).

Cooper had been employed at SCA for the past 18 months as a national account manager selling across the 2DayFM and Triple M networks.

Streaker, boot throwing… This is chaos! 😂

SCA were again tightlipped – as it has been all week following Cooper’s boozy weekend antics – when B&T enquired of his employment status.

Yesterday, the network said it was aware of the incident and was investigating.

This morning, a spokeswoman for the network issued B&T this vague statement: “We have conducted and completed a thorough investigation of this incident and taken appropriate action. We do not disclose confidential information relating to employment matters.”

It had been reported that Cooper attended the Parramatta-West Tigers match as a representative of SCA after he was given a free ticket by the NRL as part SCA’s broadcast rights deal with the league. However, SCA denies the claim and said he did attend the game on a free ticket but “at his own leisure”.

This morning, Kyle Sandilands announced on his rival breakfast show, ARN’s KIIS FM, that he had learned that SCA had terminated Cooper’s employment before adding that he was was prepared to offer the 34-year-old a job.

“He was a radio guy,” Sandilands said of Cooper. “He worked over at 2DayFM and Triple M and he wasn’t just any old guy, he was the sales manager for both stations.

“Apparently he’s a very high flyer, a big deal, had very big clients; the clients loved him and think he’s a top bloke.

“I’m led to believe that Cooper was marched into SCA’s HR – at the tower of arrogance, they all think they’re so bloody wonderful, the executives over there – and they raked him across the coals and I believe the guy has been fired.

“Fired for getting his dick out,” Sandilands joked to listeners.

“I rang [ARN’s] CEO and said this poor bloke has got his willy out, cheered by 25,000 fans at the game, doing it for God knows what reason, but did it none the less, and has been fired.

“Matthew Cooper you have everything it takes to represent the Kyle & Jackie O show. Put on your little suit – pants or no pants – front up here at the radio station and we will organise something for you. You have a place amongst us. Forget those dogs,” Sandilands said, taking one last pot-shot at his previous employer.

However, a quick check of Cooper’s LinkedIn profile shows no changes to his employment details. Cooper has laid low since Sunday’s fleshy dash and has not commented publicly.

Not that the poor bugger hasn’t suffered enough. Yesterday’s Daily Telegraph included a full front-page cover to Cooper’s nude run including pixilated genitals, plus a further two-page report inside. 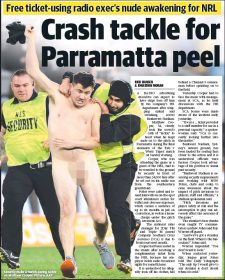 Adding to that, Cooper has been charged with wilful and obscene exposure and was also charged under the pitch invasion act. He is due to appear in Parramatta Local Court next month and faces a maximum fine of $12,000 and/or up to a year in prison.