Advertise with us
Posted 5 September, 2016


It’s Spring and that means one thing – Australia’s horse racing tracks are getting set for their busiest time of the year.

However, Racing Victoria is off to a particularly bad start after it was revealed the female model in its advertising images was found to be wearing nothing more than body paint. 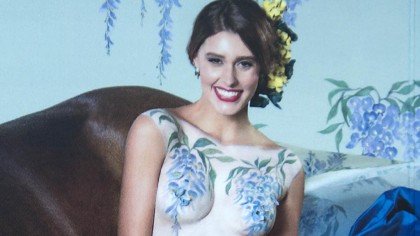 Race tracks regularly use young, pretty, fashion-types to promote their carnivals and Racing Victoria followed the template, however, it has clearly over-stepped the mark with a model wearing a billowing silk gown and a body-painted bodice with appears to show the model’s nipples.

The campaign, titled “Melbourne in Full Bloom”, has been derided on social media as sexist and objectifying women, particularly as the the man in the image is wearing a suit.

The horse racing industry has been attacked for its portrayal of women in the past, with the issue coming to head when the first female jockey won the Melbourne Cup last year in the event’s 155 year history.

One commentator to Racing Victoria’s Facebook page wrote: “It is using women as naked sexual objects in an industry that is renowned for its sexism. If you were to celebrate sport, then surely you would celebrate women in sport, not as sexual objects. Not good enough in 2016.”

While another wrote: “Most industries would tread carefully after such acquisitions. But your marketing department has paid for a campaign showing two female models topless with just paint covering them. Is that brave, or dumb or just plain sexist?”

Racing Victoria  is yet to respond to the criticisms, however, media reports over the weekend said it would scale back the use of the image and campaign.