As people in PR are fond of saying, “There’s no such thing as bad PR”. Well, Seven bosses might be rethinking the old adage after activists launched a petition to stop its upcoming show Yummy Mummies from airing.

In a promo for the show, one of the featured “yummy mummies” says, “Breastfeeding in public is illegal. You just don’t do it” after seeing a mother breastfeeding her baby in a cafe.

Cue the fury of the The Australian Breastfeeding Project who’ve launched an online petition and are demanding that Seven axe the show which is yet to have a release date.

The Change.org petition has already gained over 18,000 signatures, while disgusted mothers have also taken to Seven’s Facebook page to vent their rage. “‘Shame on you! I hope ALL mums and mums to be boycotted this show! Nursing in public is LEGAL….anywhere, anytime!” one woman wrote.

An online poll on News Corp websites asked readers if they planned to watch “Yummy Mummies”, with 82 per cent of the 648 voters voting a resounding “no”. Twelve per cent said “yes” and six per cent were undecided.

The Australian Breastfeeding Project also argues that the comments breach the Commercial Industry Code of Practice. Read the petition statement below: 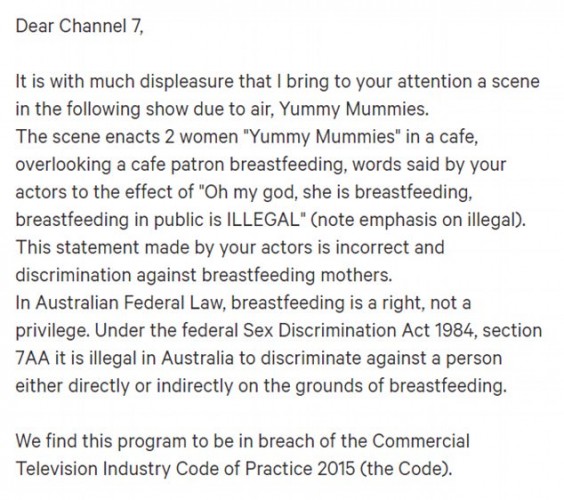