OMD Sydney has raised over $16,000 at their annual ‘Pyjamathon’ fundraiser for children’s charity The Pyjama Foundation. It is their most successful fundraising initiative for the charity to date, raising over $4,000 more than last year’s event.

OMD’s ‘Pyjamathon’ is a competitive event, consisting of 16 teams, racing around Pyrmont to complete a series of challenges ranging from dizzy bat relays, to creating spaghetti towers.

The event was organised by OMD Sydney’s social responsibility pillar, OMDonate, of which The Pyjama Foundation is the principal charity partner. 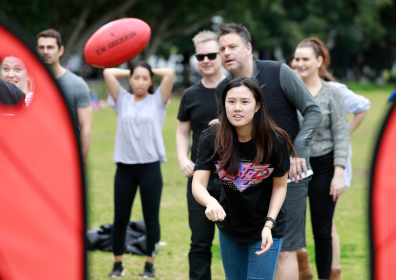 Aimee Buchanan, CEO, OMD Australia, said “At OMD, we recognise the power of our industry to give back to the wider community.

“In addition to being a team building experience, our work with The Pyjama Foundation gives OMDers greater purpose beyond the day-to-day, whilst simultaneously providing much needed funds for the foundation.”

“It’s an event that helps OMDers form new friendships across different teams, raise money for a fantastic cause and have a blast all at the same time. Who doesn’t love playing Human Hungry Hippos?” said

“This money will go towards supporting more foster children who are desperately waiting for the arrival of their volunteer mentors, who will help them with their learning and encourage them to achieve their dreams.”

Through its network of Pyjama Angels, The Pyjama Foundation empowers children in foster care with learning, life skills and confidence to change the direction of their life.

Over the last three years, OMD Sydney has worked with the Pyjama Foundation for its National Pyjama Day, securing over $2.5 million in media value with help from its industry partners.