Nine Entertainment and Fairfax Media have entered into an agreement to merge the two companies into a merged entity.

The proposed transaction will, subject to required approvals, be implemented by Nine acquiring all Fairfax shares under a scheme of arrangement, with the value of the combined entity estimated to be $4.2 billion.

Following completion of the proposed transaction, Nine shareholders will own 51.1 per cent of the combined entity, with Fairfax shareholders owning the remaining 48.9 per cent.

The combined business will include Nine’s free-to-air television network, a portfolio of high growth digital businesses, including Domain, Stan and 9Now, as well as Fairfax’s mastheads and radio interests through Macquarie Media. 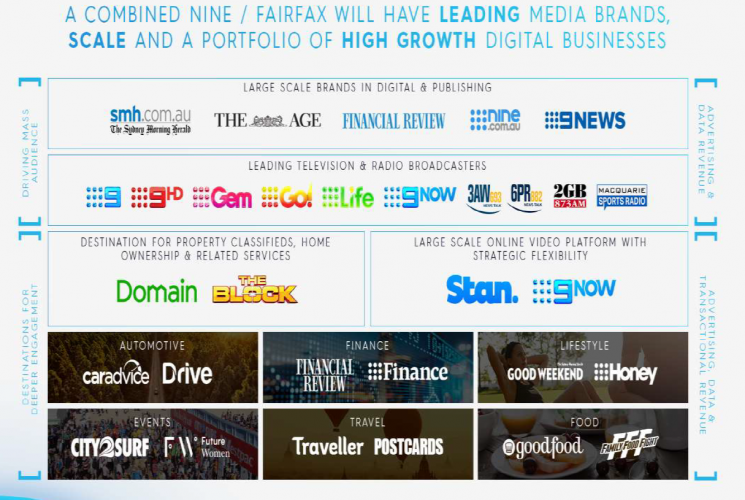 Marks said: “Nine’s strong operating momentum has allowed us to invest in the future of our business through each of 9Now, Digital Publishing and of course, Stan.

“This merger with Fairfax will add another dimension, creating a unique, all-platform, media business that will reach more than half of Australia each day through television, online, print and radio.

“For our audiences and employees, this means we will continue to be able to invest in premium local content across news, sport, entertainment and lifestyle.

“For our agency partners and advertisers, we will provide an expanded marketing platform with even greater advertising solutions underpinned by a significantly enhanced data proposition.

“For our shareholders, the merged business will generate an increasing percentage of its earnings from high growth digital businesses that provide a compelling opportunity to generate both incremental value and cash flow into the future.”

Fairfax CEO Greg Hywood said: “The proposed transaction for Fairfax reflects the success of Fairfax’s transformation strategy which has created value for shareholders through targeted investment in high-growth businesses, such as Domain and Stan, and prudent management of our media assets.

“The combination with Nine provides an exciting opportunity to continue to drive incremental value well into the future.

“We are confident that the strength of the combined management team and staff will ensure the continuation of our quality journalism.”

It was last reported that Seven West Media was the more likely candidate to jump into bed with Fairfax, with the publisher’s talks with Nine understood to have broken down in April.

It also marks the first major media consolidation move since the new media laws were passed in October last year.