Roy Morgan Research today releases the latest Readership results for Australian newspapers for the 12 months to March 2017, showing cross-platform audience is steady overall thanks to the continuing transition of print readers to digital platforms. View the full results here.

Across print and digital, 12,959,000 Australians 14-plus (65 per cent) accessed cross-platform newspaper mastheads in the 12 months to March 2017. This is virtually unchanged from the year before.

Stand-out performers in this latest report are: the Australian Financial Review, increasing readers for both print and digital with an overall increase of 16.6 percent year on year; The Australian (up 12.9 per cent), and the Herald Sun (up 9.6 per cent). 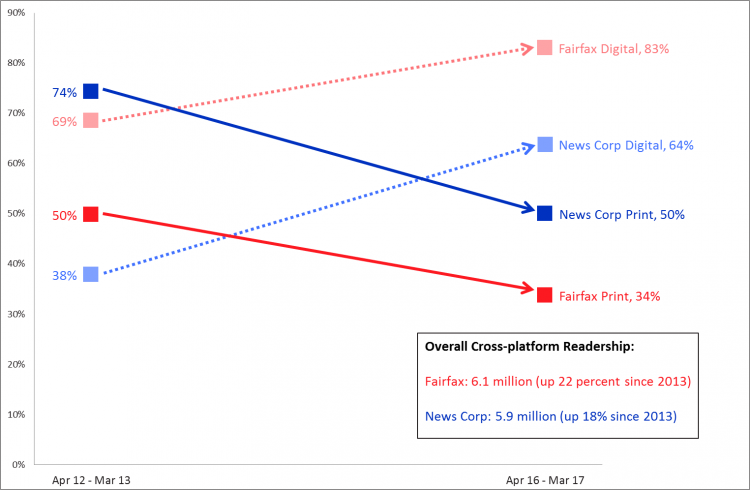 Australians are spending more on experiences and less on physical things, and this includes newspapers. Many industries—from retail to automotive to media—are witnessing a move away from traditional forms of ‘ownership’.

The product supplied by all media owners is not the physical publication or recording, but the content—which we are increasingly able to access without owning anything: whether it’s Subscription Video on Demand and music streaming, or readership of mastheads without buying a physical copy.

When it comes to newspapers, circulations have been under pressure for years — however overall engagement with newspaper brands remains high. Audiences have the same desire to access newspaper content; they just don’t need to own a physical newspaper.

This is clearly shown by the trends of rising digital readership and declining consumption of print, however some mastheads (and publishers) have been quicker than others to capitalise on the transition.

However, already 69 per cent of Fairfax’s audience were accessing the mastheads via website or app (with 50 per cent reading any print issues), compared with News Corp’s audience being just 38 per cent digital and 74 percent print.

Despite declining circulations, both publishers have expanded their overall audience thanks to digital – but, thanks to its lead in digital, Fairfax has grown more. In the latest 12 months to March 2017, 6.1 million Australians read the Sydney Morning Herald or The Age in print or digital (up 22 per cent over the last five years), and 5.9 million read the Daily Telegraph or Herald Sun (up 18 per cent).

The Courier-Mail also gained digital readers – but not quite enough to offset print declines, and finished down 0.6 percent cross-platform. The Age and the Adelaide Advertiser were both up marginally in print but, against the tide, lost some digital readers and so posted combined cross-platform declines.

Overall 7.9 million Australians read print newspapers, including 5.6 million who read weekday issues, 4.8 million who read Saturday editions and 4.3 million Sunday titles. Although all these numbers are continuing to decline, the sheer size of the audience demonstrates the ongoing importance of print.

Victorians have an insatiable appetite for good ol’ fashioned print news, especially on the weekend. Monday to Friday readership is steady for both the Herald Sun (844,000 readers per average weekday print issue) and The Age (466,000). On Saturdays, the two mastheads were both the stand-out winners, proving that readership isn’t a zero-sum game between direct competitors. Print readership for the Saturday Age grew 5.9 percent year-on-year to 648,000, and the Herald Sun grew 5.7 percent to 810,000 Saturday readers. The Sunday Age scored a huge 11.1 percent swell in readers up to 530,000, but the Sunday Herald Sun also increased its reach, up 0.8 percent to 854,000.

The country’s best-performing print title overall was also in Victoria: readership of the average Geelong Advertiser issue on Monday to Friday grew 15.1 percent to 61,000.

Both major national titles gained Monday to Friday readers: The Australian grew 10 per cent to 341,000, and the Australian Financial Review grew 6.3 percent to 204,000. However their weekend editions declined.

In Queensland, the Cairns Post has bucked the downward trend, growing 8.2 per cent to 53,000 print readers on an average weekday and 1.4 percent to 73,000 on Saturdays. In NSW, the Illawarra Mercury has performed best by holding steady with 36,000 readers Monday to Friday and (almost) steady with 38,000 on Saturday. In South Australia, the Sunday Mail grew 2.6 percent to 436,000 readers – outperforming its weekday and Saturday editions.

Arriving with The Australian on the first Friday of the month, Wish magazine has continued to record strong growth on the back of the success of its host. Readership of Wish is up 41.6 percent compared with the 12 months to March 2016, to 126,000.